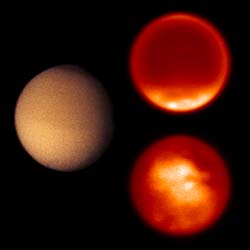 Voyager 1's view of Titan (left) was disappointing because the big moon is enshrouded in hydrocarbon haze. However, the view from Hawaii's Keck II telescope at a wavelength of 2.11 microns (upper right) reveals bright storm clouds near the south pole, and at 2.06 microns (lower right), the haze is transparent enough to reveal surface detail.

If astronomers had an award for "Most Mysterious Moon," it would likely go to Titan, the giant satellite of Saturn. Bigger than Mercury, Titan is enveloped by a dense, haze-choked atmosphere that keeps its surface hidden from view. But for the past decade telescopic observers have managed to punch through the haze at near-infrared wavelengths, allowing them to obtain glimpses of the moon's surface geology with ever-improving clarity.

Thanks to adaptive-optics technology, which counteracts much of the image-distorting turbulence created by Earth's atmosphere, the newly released images of Titan have roughly twice the detail of previous views. Spectroscopic studies had hinted that Titan's atmosphere was alive with storm activity, but the new views reveal the clouds' movement and evolution directly. Images taken by Roe's team show changes in the bright polar clouds over just a few hours. "The biggest question had been how frequently the clouds formed and how long they lasted," explains Antonin H. Bouchez, a member of Brown's team. "Now we see that they're always there."

Infrared images of Titan reveal the changing appearance of methane-ice clouds near the moon's south pole. The largest storm in February 28th's image is more than 1,400 kilometers long. An adaptive-optics camera on the Keck II telescope recorded these views.

Courtesy M. E. Brown, A. H. Bouchez (Caltech) and others.

Carefully "tuning" the cameras to look at different wavelengths between 2.0 and 2.2 microns allowed the observers to probe different elevations in the atmosphere and determine that the cloud tops reached altitudes of about 15 kilometers. Theorists suspect that the clouds start out lower down, then rise buoyantly as methane condenses into droplets and releases stored heat. What triggers the cloud formation is not clear, but right now Titan's south pole is basking in continuous midsummer sunlight and the clouds may be analogous to summer thunderstorms on Earth.

Scientists have been puzzled by Titan's murky atmosphere ever since Voyager 1 swept by at close range in 1980 and failed to see any surface detail. They hope to fare better when the Cassini spacecraft reaches the ringed planet in two years. The Saturn orbiter is equipped with an infrared imager, radar sounder, and electromagnetic sensors. Even better, the European-built Huygens probe will record a wealth of data during its two-hour plunge through Titan's atmosphere.