Sky & Telescope editors made the annual pilgrimage to the Northeast Astronomy Forum last weekend to scope out new products, give (and see) talks about amateur astronomy, and, best of all, talk with our readers. 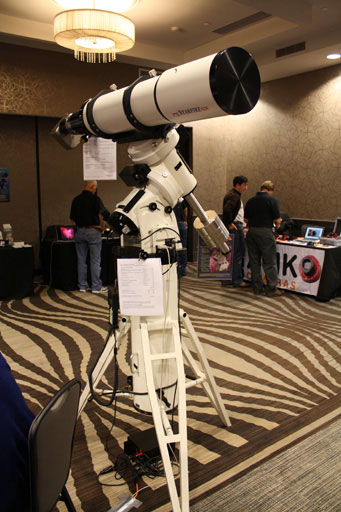 The new AP 175 StarFire telescope atop the also-new AP 1600GTO mount at the Northeast Astronomy Imaging Conference. Yes, that is a right-angle polar finder scope.

Amateurs from around the country and beyond flock every April to the Northeast Astronomy Forum (NEAF) to see manufacturers unveil their newest innovations, and this year surely did not disappoint. The theme seemed to be equatorial Go To mounts. Although we can't possibly list all the great new products we saw, a few highlights include the new Astro-Physics AP1600GTO, Morning Calm's 200GE, and Meade's new LX80, LX800, and LX600 mounts. iOptron displayed its new iEQ30 mount, but a mount that really caught our attention was the lightweight, ultra-portable SMART EQ for only $399. Software Bisque also showed off it's new Paramount MX mount and portable tripods.

While many great new telescopes were rolled out over the weekend, one that was particularly notable was Stellarvue's new tiny 50ED Apochromat — a 50mm f/6.6 refractor that just may be the smallest apochromat on the market. For the reflector crowd, Teeter's Telescopes had some attractive Dobsonian kits available, while Hubble Optics made its first appearance with 16- and 18-inch ultra-light Go To Dobs.

Look for details on these new products (and many more) in S&T's August issue.

Robert Naeye Talks to the Crowds 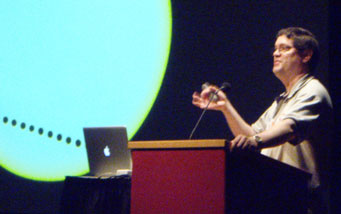 S&T Editor in Chief Robert Naeye talked about the upcoming transit of Venus to a full auditorium on Saturday morning at NEAF.

S&T Editor in Chief Robert Naeye presented “Transits of Venus: Few & Far Between” to a full auditorium on Saturday morning. He started off by explaining the peculiar cycle of transits of Venus, and why they are so rare. He next discussed the history of transits, and why astronomers of the 1700s and 1800s undertook long, expensive, and perilous expeditions to observe them. Most importantly for today's observers, he gave some tips on how to observe and photograph the upcoming June 5th transit, emphasizing the fact that (barring a medical miracle) this will be the final transit of Venus that any adults alive today will ever witness. The next transit is in December 2117. 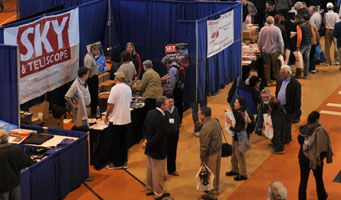 As always, a central part of NEAF for us is the chance to meet lots of readers — the people for whom we exist and who keep us going. Senior editor Alan MacRobert was struck in particular by two men who came to the booth in rapid succession.

The first man started paging through the Sky Atlas 2000.0 on display in the S&T booth. He said he had worn out two copies of it over the years. "It turned out," Alan says, "he had been reading the magazine every month since before I started here in 1982. Here was this complete stranger, and he and I had been a significant part of each others' lives for 30 years. I think both of us were a little amazed at this — him for meeting someone he's been reading all this time, and me for meeting a person for whom I've done much of my life's work." In fact, many long-time readers stopped by the booth, and it was a pleasure talking to them all.

Shortly after the first man stopped by, another man stopped by to look at our new photographic Moon globe. He mentioned that he had gotten into astronomy a couple months ago and had just learned where to find Orion and Venus. He was trying to read and absorb everything he could and came here to buy his first telescope. “That was me in a different era,” says Alan. “We can get jaded and forget just how incredibly mind-blowing everything about astronomy really is, but new people keep finding out about this freshly all the time.”

NEAF featured over 130 vendors and attracted thousands of amateur astronomers.

Another successful year of NEAF was possible thanks to the tremendous efforts of Alan Traino, the Rockland Astronomy Club, and the many volunteers. S&T has been a proud sponsor of NEAF for the last 20 years.

I am already being used to MC200GE. (Morning Calm's 200GE)
A very satisfactory performance of the MC200GE!!
Below is a photo taken by MC200GE.
Is replaced by a link.