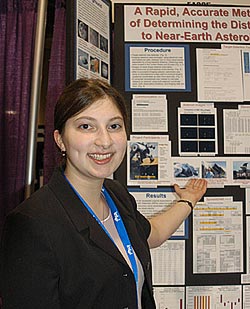 Lisa Doreen Glukhovsky, 17, with her award-winning asteroid project. She plans to pursue a career in science or mathematics.

A project by a 17-year-old Connecticut high-school student to measure the distance to Earth-crossing asteroids was one of the three top winners at this year's Intel International Science and Engineering Fair (Intel ISEF), held last May in Cleveland, Ohio. Sponsored by one of the world's leading computer-chip maker, the competition attracted some 1,200 students from 36 countries.

Lisa Doreen Glukhovsky of New Milford High School won Intel Foundation's Young Scientist Scholarship for her project entitled "A Rapid, Accurate Method of Determining the Distance to Near-Earth Asteroids." The other top winners were Elena Leah Glassman, 16, of Doylestown, Pennsylvania, for her project on using brain-wave data as a way for people with muscular dystrophy to access computers and Anila Madiraju, 17, of Montreal, Canada, for using ribonucleic acid (RNA) to selectively target and kill cancer cells. Each of them received a $50,000 scholarship from Intel along with a personal computer. In addition, Glukhovsky won $22,000 worth of scholarships from various companies and organizations.

"I've always loved astronomy," says Glukhovsky. "Therefore, when the opportunity for doing a yearlong project came about, I went to the John J. McCarthy Observatory in New Milford to discuss project ideas with my mentor, Monty Robson. I decided to find the distance to near-Earth asteroids for many reasons, especially because of the exciting, inherent importance to Earth."

Glukhovsky's project was to determine the distance to various Earth-crossing asteroids. One such object, asteroid 29075 (1950 DA) was imaged with radar on March 4, 2001, from Arecibo observatory in Puerto Rico. At the time, the asteroid was 7.8 million kilometers from Earth (22 times the Moon's distance).

Glukhovsky coordinated simultaneous observations of a number of minor planets over several nights from various sites in North America and Europe to obtain the precise parallax to these objects. She also conducted some of the observations herself. "Many of my observations were submitted to the Minor Planet Center in Cambridge, Massachusetts," she explains. "They were all accepted and of high quality, which means they were used in determining the orbits of the asteroids I observed."