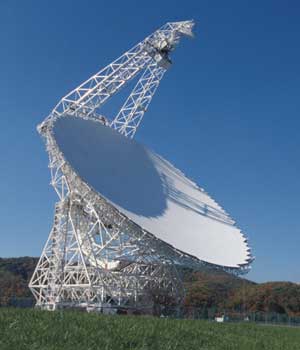 High-schools students in West Virginia will soon be able to make a claim that very few people on the planet can: "I discovered a pulsar!"

A project will soon get underway, a collaboration between the National Radio Astronomy Observatory (NRAO) and West Virginia University, that will give some 600 students and 60 teachers the chance to help analyze 1,500 hours of data gathered by the Robert C. Byrd Green Bank Telescope (GBT) in West Virginia. This huge dish, measuring 100 by 110 meters across, has 120 terabytes of data awaiting scrutiny for telltale signs of pulsars.

According to a NRAO press release, GBT observations have already led to the discovery of 60 pulsars during the past five years. Each of these spinning neutron stars sends out a beam of radio waves that sweep around as the stellar remnant rotates as many as several hundred times per second.

A grant from the National Science Foundation will set up the Pulsar Search Collaboratory, which will dole out data to teams of students. The teenagers will have to learn how to distinguish known sources of radio emission (such as Earth satellites) from cosmic beacons. The set of data students will study should include about 100 known pulsars and perhaps a few dozen unknown ones.