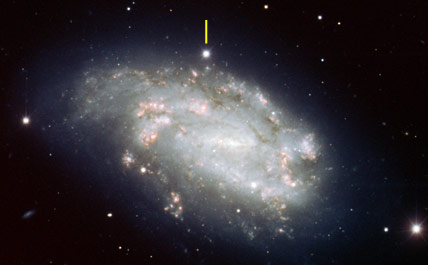 Supernova 2005df is indicated in the northern fringe of the barred spiral galaxy NGC 1559. Located in Reticulum near the Large Magellanic Cloud, the 10th-magnitude galaxy has a mass of only about 10 billion suns and lies some 50 million light-years away. This near-true-color composite was captured on August 6th with the 8.2-meter Kueyen reflector of the European Southern Observatory's Very Large Telescope array. North is up and east is to the left in this 5.5'-wide view.

On the night of August 4th, legendary supernova hunter Robert O. Evans made his 40th visual discovery of a supernova, a world record. Evans spotted and recognized the new, 14th-magnitude star in the barred spiral galaxy NGC 1559 using his 12-inch Newtonian reflector — and his prodigious memory for star fields. 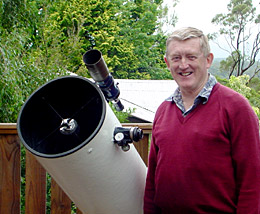 Evans observes from his backyard in Hazelbrook, New South Wales, about 100 kilometers (70 miles) west of Sydney. He searches for supernovae by memorizing the fields of galaxies. He has committed more than 1,000 galaxies and their environs to heart down to magnitude 15, so that he can check each field rapidly and systematically just by eye.

In addition, Evans has found five more supernovae and a comet on photographs: four of the supernovae and the comet on UK Schmidt plates as part of a professional-amateur search effort, and one on ESO Red Survey plates.

Designated SN 2005df, his latest supernova was soon determined to be of Type Ia, caught a few days before it attained its maximum brightness. Type Ia explosions happen in a close binary-star system where a white dwarf, accreting matter from its companion star, reaches critical mass, becomes unstable, and starts to shrink. In a matter of seconds its material undergoes a complete thermonuclear runaway reaction. The catastrophic explosion can, for a few days, outshine its entire host galaxy.

Wang and the ESO team made the color-composite image of SN 2005df and NGC 1559 above by combining VLT images taken at visual, red, near-infrared, and hydrogen-alpha wavelengths. "This is probably the greatest picture of the supernova and galaxy that one will ever see," notes Evans.