Whenever I hear a claimed discovery that overturns conventional wisdom on some important aspect of astronomy, my skepticism meter goes on high alert. Such was the case on Wednesday, when I listened to a NASA press conference in which two astronomers based in Germany presented evidence arguing that the most popular model for Type Ia supernovae is incorrect, at least for elliptical galaxies. 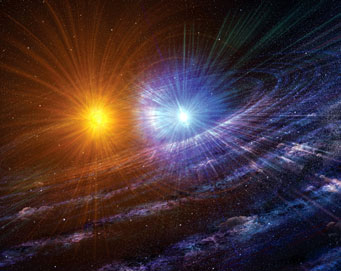 This artist's rendering depicts the type of system thought to be responsible for most Type Ia supernovae. A red giant appears on the left, and a white dwarf (depicted at the moment of explosion) appears on the right.

Astronomers are in agreement that Type Ia supernovae (SN Ia) occur when a white dwarf (a collapsed, Earth-size remnant of a star) blows itself to smithereens, producing an extraordinarily powerful explosion that large telescopes can see from billions of light-years away. But despite years of intense study on both observational and theoretical fronts, the details remain shrouded in mystery.

The standard textbook explanation for SN Ia goes something like this: Type Ia supernovae occur in binary systems consisting of a white dwarf and a normal star. As the normal star gives off a wind, some of the gas becomes trapped in a disk around the white dwarf. The gas spirals in, collecting on the white dwarf's surface. If enough gas accumulates on the white dwarf to push its mass close to the Chandrasekhar limit (1.4 solar masses), it ignites a powerful thermonuclear explosion that blows up the entire white dwarf like a giant H-bomb.

But astronomers have also proposed an alternative theory: Some Type Ia supernovae occur in binary systems consisting of two white dwarfs. The white dwarfs slowly spiral inward and merge, pushing the merged object over 1.4 solar masses. This object explodes as a SN Ia.

In the standard picture, the "accreting white dwarf" scenario occurs much more frequently than the merger scenario, because accreting binary systems should be more common. In addition, some theories predict that when two white dwarfs merge, they collapse to form a neutron star, with no supernova explosion whatsoever. As astrophysicist Mario Livio (Space Telescope Science Institute) points out, "Whether or not mergers can indeed produce Type Ia supernovae is not clear from a theoretical standpoint."

But if most SN Ia are triggered by accreting white dwarfs, gas falling onto a white dwarf should give off copious amounts of X-rays. In the NASA press conference, Marat Gilfanov and Akos Bogdan (Max Planck Institute for Astrophysics in Garching, Germany) said they had searched five elliptical galaxies and the central part of the Andromeda Galaxy with NASA's Chandra X-ray Observatory. They found 30 to 50 times less X-ray emission in the elliptical galaxies than they expected to see if accreting white dwarfs make up the majority of SN Ia progenitors.

"Our results suggest the supernovae in the galaxies we studied almost all come from two white dwarfs merging," says Bogdan in a Chandra press release. "This is probably not what many astronomers would expect."

To find out if this was a valid claim, I consulted a number of leading experts in the field. Although everyone seemed to agree that Gilfanov and Bogdan took a creative approach toward addressing the problem, the replies were all over the map, and it's clear that the origin of SN Ia remains very much an open question.

Andrew Howell (University of California, Santa Barbara) pointed out that astronomers have known for years that there aren't enough accreting white dwarf binaries to explain the number of observed SN Ia. Speaking of this new study, Howell says, "It's not a leap, but a new step down a long path toward understanding the progenitors of SN Ia. The evidence has been building for years that the accreting-white-dwarf scenario cannot explain all SN Ia."

Alex Filippenko (University of California, Berkeley) adds, "I'm not disagreeing with Gilfanov and Bogdan that some Type Ia supernovae come from white dwarf mergers. People have been saying this for a long time. It's just that we've had trouble finding actual binary white dwarfs that have the potential to merge in the age of the universe."

Brad Schaefer (Louisiana State University) points out that the Gilfanov/Bogdan study assumes that all accreting white dwarf binaries shine in X-rays at a relatively uniform and steady rate, but that doesn't hold true in many known systems that contain a white dwarf and a normal star. "Their conclusion is clearly and easily wrong," he says.

Sumner Starrfield (Arizona State University) notes that astronomers are finding that SN Ia are not as uniform as once thought. "It now looks like there are at least two kinds of SN Ia, and they may occur in different types of galaxies. So, they are probably only addressing one type," he says.

Several astronomers also pointed out that a group led by Rosanne Di Stefano (Harvard-Smithsonian Center for Astrophysics) has already announced similar results, and that these results apply to galaxies of all types. But Di Stefano cautions, "We must be very careful about the implications for the models," because it's possible that accreting white dwarfs reprocess the X-ray radiation they emit, meaning it wouldn't necessarily show up in the Chandra observations of elliptical galaxies.

Despite this new study, the origin of SN Ia remains an unsolved problem; it's quite possible that these cataclysmic explosions have multiple origins. And it's a mystery that has much broader significance. As Schaefer points out, "The Type Ia supernova progenitor problem is one of the biggest and longest-lasting questions in astrophysics. And just 10 years ago the problem became uber-important."

Why? Because cosmologists can calibrate the luminosities of SN Ia, they use them to study the expansion history of the universe. By studying distant SN Ia with both ground- and space-based telescopes, two teams announced in 1998 that cosmic expansion is accelerating, which hints that most of the universe's energy is in some unexplained form known as dark energy.

Since 1998 astronomers have used completely independent methods to confirm the accelerating universe, so this new result casts no doubt that there's a lot of dark energy out there. But lacking a complete understanding of SN Ia makes it more difficult for astronomers to use them for cosmology studies, which will make it harder to pin down the precise details of the universe's expansion history, which in turn could make it more difficult to unravel the profound mystery of dark energy.

This report looks like a problem may exist that is in need of double talk to obfuscate the problem. If Type Ia SN are not standard candles with similar peak brightness (as this report surely reveals), perhaps the accelerating universe claims of 1998 and since could contain problems too as well as cosmological distance measurements.

The dark energy mystery results from model oversimplification. The Friedman model leaves out two critical parameters, k & R. These factors, when included in the model, combine to give the observed dark-energy: lambda=k/R^2. For an explanation of k & R, and a derivation of this equation, see http://www.dark-energy.org The only mystery is how so many professionals can repeat Friedman's original error, overlooking 2 factors.

Surprised to hear that such a website exists, I visited Darkenergy.org and found that it is not working. Any idea who publishes that site?

Truly excellent article Robert. One thing I've learned over the years: If NASA has called a press conference to type something, then you should hold on to your wallet. Too bad other folks, like the Bad Astronomer, to name one of many, didn't take the time to dig into this story as well as you did.