A new analysis of spacecraft data suggests that gigantic calderas lie disguised on the planet’s surface.

When it comes to volcanoes, Mars has always outclassed Earth. At 22 kilometers above the surrounding plains, Olympus Mons is almost three times the height of Mount Everest. Mars’s Alba Mons is one-third as wide as the United States (depending how you measure). 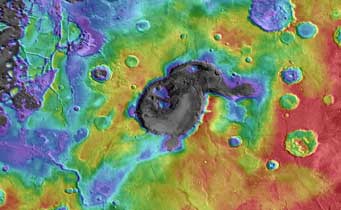 Eden Patera is one of several features on Mars that geologists think might be ancient, collapsed volcanoes. ("Patera" is Latin for a shallow bowl.) This image combines digital elevation data with daytime thermal infrared images. Red colors are relatively high and purple-gray colors are low. The caldera is approximately 1,800 meters deep and approximately 70 km wide in the longest dimension. The caldera experienced multiple stages of collapse.

But a new study in this week’s edition of Nature proposes that the largest volcanoes on Mars have gone unnoticed — until now.

Joseph Michalski (Planetary Science Institute, Tucson, and the Natural History Museum, UK) and Jacob Bleacher (NASA Goddard) propose that a series of blob-shaped pits on Mars might represent a new class of Martian volcanoes: the supervolcano.

On Earth, supervolcanoes are broad, low-lying features that tend to erupt more than 1,000 cubic kilometers of volcanic ash and lava at once. (For comparison, the eruption of Mount St. Helens in 1980 blew off approximately 1 km3). Earth has seen few volcanic eruptions of this magnitude. The Deccan Traps, which erupted 65 million years ago, spread in a single eruption 9,000 km3 of lava across much of what is now India. Fifteen million years ago, the Columbia River Basalts erupted batch after batch of 2,000 to 10,000 km3 of basalt across the modern-day Pacific Northwest.

Now, Michalski and Bleacher are proposing that Mars was once home to similarly catastrophic eruptions. Using satellite imagery, the geologists mapped the Arabia Terra region of Mars, which lies on the edge between the planet’s drastically different northern and southern terrains. They found seven irregular pits, each upwards of 20 km across (the largest are more than 50 km), which they interpret as calderas: bowl-shaped craters that formed as magma erupted from a subsurface chamber so explosively that the volcano collapsed. Oregon’s Crater Lake formed this way, although, at only 8 km across, it is dwarfed by these Martian calderas. 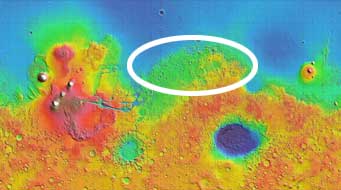 This laser altimetry map shows Mars's topography at high resolution. Arabia Terra is the green region circled and lies between the planet's large northern depression and the heavily cratered southern terrain. The big red region on the left is the Tharsis region, another ancient volcanic zone: the three bumps in a diagonal line are the Tharsis Montes, and the even bigger bump to the upper left is Olympus Mons.

These Martian pits were once thought to be irregular impact craters, too low in relief to be volcanoes. However, the new analysis points out telling volcanic features, such as distinct ridges and terraces, that more closely resemble terrestrial calderas than craters.

Such catastrophic eruptions of ash and lava on ancient Mars could have drastically altered the planet’s climate. On Earth, supervolcano eruptions often result in “Volcanic Winter,” a global chilling caused by fine atmospheric ash reflecting away solar energy. Mars’s climate likely suffered a similar chilling as these supervolcanoes erupted.

If the giant pits of Arabia Terra are extinct volcanoes, they might be responsible for the thick deposits of ashlike debris that blanket Mars’s equatorial region. NASA’s Opportunity rover investigated this debris at its Terra Meridiani landing site, and the Curiosity rover is now encountering it inside Gale Crater. For decades, geologists have debated whether this thick debris layer formed from vast deposits in ancient lakes or volcanoes. The supervolcanoes of Arabia Terra might at last be the cause.

But a volcanic origin for the equatorial deposits does not mean a dry Mars. Water-bearing minerals are found throughout the fine ash deposits. These may have formed as groundwater percolated through the volcanic ash, altering some minerals into the ones we see today.

Below, you'll find a video by Nature explaining the result. Credit: Nature Video.