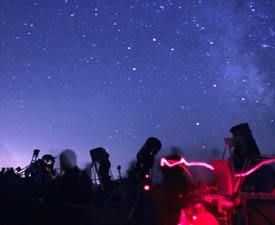 Some 700 amateur astronomers from around the world enjoyed a week of blue-sky days and starlight nights at this year's Table Mountain Star Party (TMSP), one of the premier stargazing events in the Pacific Northwest. TMSP has been held each summer since 1980 atop 6,300-foot (1,920-meter) Table Mountain in central Washington State. The plateau is one of the darkest sites in the region.

This year's event, held from August 4th to August 6th, was exceptional. Participants got their fill of telescopic wonders, a brief display of the northern lights, many spectacular Perseid fireballs, and a noteworthy "attack" of Iota and Delta Aquarid meteors. During the day, Coronado telescopes were sprinkled across the observing field, offering fantastic hydrogen-alpha views of the Sun, and David Nagler of Tele Vue Optics wowed many guests with sharp daytime views of Jupiter and its belts through one of his company's 4-inch refractors.

But as Russell Vodder, TMSP board member says, "TMSP is not about getting serious observing done, though that happens; it's about putting on an exciting event for adults and children. The idea is to get people interested in astronomy."

This philosophy was reflected in the speakers program: Joe Rottmann (Rose City Astronomers) introduced beginners to the most common types of telescopes and how focal length affects magnification and field of view. Randy Johnson (Seattle Astronomical Society) discussed ways to fabricate your own telescope mirror. Jim Bielaga (Everett Astronomical Society) helped observers build observing lists that go beyond the Messier objects. And Jonathan Fay (Bear Creek Observatory) discussed the blossoming field of astro-imaging with digital cameras. And Winter Star Party founder Tippy D'Auria of Miami, Florida, gave one of the more memorable presentations when he demonstrated how to use rolls of toilet tissue to measure astronomical distances.

The talks were augmented by daily student programs that entertained the 170 registered youngsters. The activities included telescope-making workshops, astro-bingo contests, geological talks and walks, and movie nights. Two youngsters, Tonya Williams and Michaela Mann, both of Spokane Washington, shared why they like TMSP. "It's fun, Mann says, "to learn something new about our sky, especially the different constellations." Williams adds, "It's cool. Astronomy is one of my favorite hobbies. Besides, I get to spend time with my Dad."

If you're thinking about attending TMSP 2006, the dates are July 20–22. TMSP usually reaches its 700 registration limit by early April. So don't delay.