At first, observers thought the object designated P/2013 P5 was a comet lurking among the asteroids. But two sets of Hubble images show instead that's a bizarre asteroid that's shedding tails of dust into space.

David Jewitt is a veteran solar-system observer with a special interest in "main-belt comets," coma-shrouded objects that orbit among the asteroids between Mars and Jupiter. In fact, the UCLA astronomer has tracked down all 10 of the known ones.

So, in mid-August, when a team of observers led by Marco Micheli (University of Hawaii) discovered an 11th candidate, which was given the periodic-comet designation P/2013 P5 (PanSTARRS), Jewitt jumped into action. He quickly got approval to image the new object with the Hubble Space Telescope on September 10th and 23rd — and the resulting images were incredible. 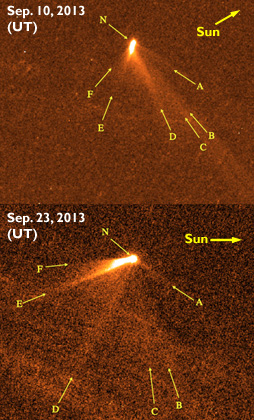 Two false-color views of P/2013 P5, as recorded by the Hubble Space Telescope 13 days apart. The projected appearance of the object's six tails changed dramatically in that time. Each tail is identified with a letter; N is for the main object.

Instead of a simple object with a single tail streaming behind it, P/2013 P5 turned out to have six tails radiating away from the central body. Moreover, the tails' appearance changed dramatically in the two weeks between Hubble's photo sessions. "We were literally dumbfounded when we saw it," Jewitt notes in a press release.

The tails weren't created all at once. Instead, based on modeling by team member Jessica Agarwal (Max Planck Institute for Solar
System Research), they appear to have been shed by the central body on six specific dates: April 15th, July 18th, July 24th, August 8th, August 26th, and September 4th. The tails then stretched out in a way that suggests their tiny particles range from 10 to 100 microns in size.

But P/2013 P5 probably isn't a comet. For one thing, it's in an orbit shared by the Flora family of asteroids, which formed roughly 200 million years ago, so it's likely just a chip off this grouping's parent body. Nor is it plausible that a rogue comet somehow became captured into asteroid-belt residency. A collision could certainly raise a cloud of dust — but not six times over the past half year.

Instead, Jewitt and his collaborators conjecture (in November 20th's Astrophysical Journal Letters) that the central mass is simply shedding dust every now and them. Using the Hubble images and knowing that Flora-family asteroids have fairly reflective surfaces, they estimate that the "nucleus" is no bigger than 1,600 feet (0.5 km) across — and probably somewhat smaller. So there's barely enough gravity to hold itself together.

If P/2013 P5 spins rapidly, which is likely a common trait within the Flora family, then dust on its surface must be sliding toward its equator, where it piles up and sloughs off into space. Sounds a little far-fetched, but the team finds this the most plausible explanation. And since the tails together represent no more than about 0.1% of the body's mass, they'll likely keep appearing until the near-surface dust runs out.

It doesn't take much spin for a loosely bound small asteroid to start shedding bits and pieces of itself. There's a wonderful little known fact in celestial mechanics: the "surface-skimming" circular orbit period is nearly the same for all objects made of "normal" matter. Of course it's widely known that a satellite in Low Earth Orbit takes about 90 minutes to orbit the Earth. You'll find nearly the same orbital period for a satellite in low orbit around any object, whether it's a planet as big as Jupiter or a meteoroid just a few feet across. The surface-skimming orbital period depends a little on mean density and the Earth is quite dense so the actual average low orbit period is in the range from two to four hours. If you have an object of any size, like this asteroid a quarter of a mile across or even a much larger object, and if it's rotating with a period of two or three hours, then points on its equator are actually very close to orbital velocity. Any debris that heads downhill towards the equator in a "landslide" can easily find itself with a speed above orbital velocity at the equator. And just 41.4% higher than that speed puts that debris above escape velocity from that surface-skimming orbit. You can literally fall off the asteroid by walking towards the equator. When visiting asteroids with rotational periods less than two hours, bring a map, and stay near the poles!

Nice addition to an interesting article Mr. Reed. I'm left with two lingering questions however. (1) Has this asteroid's spin increased recently and if so what could have been the cause? (2) Except for right near the asteroid the debris "tails" are perfectly straight. Why aren't they curved all along their lengths since they are being flung from a rapidly spinning source?

Hi Bruce. There's relatively good evidence that most smaller asteroids spin up over millions of years and any loose bits are lost (new ones are created by occasional collisions). Small "rubble pile" asteroids dis-assemble from this "spin-up" process. The object described here would be the first small asteroid "caught in the act". They spin up to about two hours rotation rate, and then they come apart. No known asteroids larger than about 500 feet across spin faster than that. Whether it's a thousand feet across, a mile across, or ten miles across, an asteroid will disintegrate if its rotation period is less than a couple of hours. The force that is believed to cause the increase in spin is sunlight and radiation pressure. This "light torque" has come to be known as the "YORP effect". Here's a nice Wikipedia article on it: http://en.wikipedia.org/wiki/YORP_effect. As for the shape of the tails, I believe they're controlled by primarily by radiation pressure, much like the dust tails of comets. The dust particles would presumably be very fine dust, like soot. Larger particles (millimeter size and larger) may be present and behaving differently, with curved patterns as you suggest, but they're harder to see from here. But on this last point, I'm only guessing... By the way, it's worth remembering that an asteroid one mile in diameter spinning on its axis once every three hours has an equatorial speed of only ONE mile per hour. So all of this disintegration is happening at very slow actual speeds. Imagine hovering nearby and watching rocks tumble down and drift off the surface at just one or two mph. The disintegration of small asteroids is a slow-motion dance.

That clears things up very well Frank. I can see that the word “rapid” may be a bit of an overstatement when speaking of the spin of these small bodies. And since these objects would have negligible gravitational attraction to anything falling off them straight trajectories should be expected. As to the YORK effect, this reminds me of a novelty item I used to see ads for, I think in Edmund’s Scientific. It was a black and white square vane enclosed in a clear vacuum bulb that would spin whenever exposed to light. I can’t remember where, but I do recall seeing one of these in operation, so I have seen light and radiation induced spin in action.

Begging your pardon, that should have been YORP effect, not YORK.

Bruce, you wrote: "I can’t remember where, but I do recall seeing one of these in operation, so I have seen light and radiation induced spin in action. " Or have you?! Read here for a little intro to this tricky 'science toy': http://en.wikipedia.org/wiki/Crookes_radiometer

Frank, after looking at your links I can see that the mechanism spinning up asteroids (the YORP effect) is different than that causing spin in radiometer gadgets, although the power source (light) is the same. I was hoping someone would post a link showing one of these gizmos in action. The key fact showing that these effects differ is that the Crookes radiometer operates in PARTIAL vacuum, but not in a hard vacuum. These “tricky” devices are driven by air molecules response to thermal differences between the sides of the vanes. Thanks again for adding to our understanding.