One of the nice things about working down the road from a major center of astronomical research is that sometimes one of its ancillary activities is worth walking up there to see. 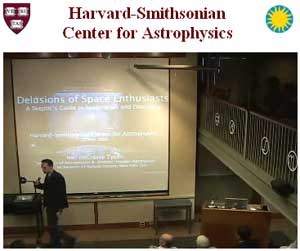 And now, on with the show!

The Harvard-Smithsonian Center for Astrophysics keeps its researchers informed and entertained by inviting other folks to give talks.

I enjoyed it a lot — and now everyone can see it. The talk is up on the CfA website for you can watch as streaming video (using RealPlayer). The full talk and Q&A period last about 90 minutes.

Don't be put off by the highfalutin "colloquium" moniker for the talk. Despite addressing a bunch of mostly astrophysicists, Tyson speaks as a regular guy and touches upon many aspects of space, history, and the mass media that may have you pondering them well afterward.

Feel free to delve into other presentations in the colloquium series, but I can't promise that they'll all be as accessible and entertaining.