Every year I look forward to representing Sky & Telescope at the annual meeting of the Astronomical League. Now boasting 15,000 members and 270 participating clubs, the League serves as the principal voice for amateur astronomy in the United States.

S&T and the League go way back — in fact, Charlie Federer, the magazine's founder, helped launch the organization in 1941 and coauthored its first constitution. Since then we've joined forces often to grow the ranks of stargazers, with special emphasis on encouraging "newbies" to get involved.

The League's youth awards are always featured at its annual convention, and with good reason. Young skygazers enrich our activities at every level. They depend on us to guide them in their explorations of the heavens, just as we'll need them to sustain our hobby in the decades ahead. So at this year's festivities, the League honored several budding astronomers whose astronomical talents and enthusiasm really stand out. 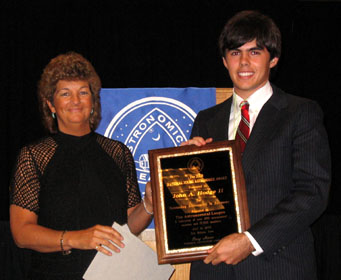 John Hodge II received the National Young Astronomer Award for 2008. A senior at Spring Valley High School in Columbia, South Carolina, Hodge took up the challenge of observing cataclysmic variable stars (compact binaries that periodically erupt after the white-dwarf primary accumulates matter from its companion) and deriving a detailed light curve for IP Pegasi in particular. I had a nice chat with John and his proud family, who'd come to Des Moines for the presentation.

In the past, the top NYAA award-winner got to cart home a Meade 10-inch LX200 telescope — but not this year, because the company abruptly decided to end its long-running support of the program. Fortunately, Scott Roberts (a former Meade executive) stepped forward to provide young Hodge with a 5-inch apochromatic refractor from his new company, Explore Scientific.

Runners up for this year's NYAA award are Lara Knorek, a senior at Kalamazoo Area Math and Science Center in Kalamazoo, Michigan, and Neil Pearson, who'll be graduating from Clear Creek High School in Evergreen, Colorado. She analyzed light curves from supernovae, and he is an accomplished science student who has built reflecting telescopes from scratch.

Carroll Iorg, the League's vice president and NYAA coordinator, encourages club officers to keep an eye out for candidates for the award. "Whether building an astronomy-related business, completing a science project related to astronomy, or doing research at an summer astronomy camp," Iorg notes, "these types of projects have a good chance of being top finishers." 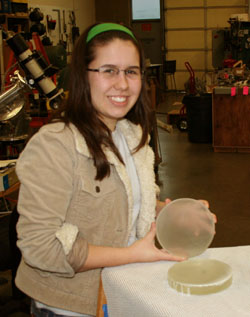 Christina Lee, winner of the 2008 Jack Horkheimer service award, works on the optics for her 6-inch Dobsonian telescope.

The League's other major recognition of youth involvement is the Jack Horkheimer Award for exceptional service by a young astronomer. Since 1998, public television's gregarious late-night stargazer has provided a $1,000 prize to 18-and-under enthusiasts who've devoted themselves to helping their clubs.

This year's Horkheimer winner is Christina Lee, who's still attending Central Catholic High School in Portland, Oregon, but already boasts an impressive astro-résumé. Lee has been an active member of Portland's Rose City Astronomers and also shows off the night sky with the Vancouver Sidewalk Astronomers. Meanwhile, she participates in the Stardust@home program (scanning images for dust particles captured by the spacecraft), and she's analyzed and classified more than 1,000 galaxy images taken by the Sloan Digital Sky Survey.

Neil Pearson took second prize in the 2008 Horkheimer competition. He's been a student member of the Denver Astronomical Society for eight years, worked with other club members to maintain and operate Chamberlin Observatory's 20-inch refractor, and has ground, polished and figured his own 8-inch f/6 telescope mirror. Third prize went to Mark Sutter, an active member of the Des Moines Astronomical Society (which hosted the conference).

Hearty congratulations to this year's winners: John, Christina, Lara, Neil, and Mark! Will some youngster you know be taking home an award next year?

Various people all over the world receive the home loans from different creditors, just because this is fast and easy.