In the annals of amateur astronomy, few have the stature of Russell W. Porter. An artist, engineer, and polar explorer, Porter basically started amateur telescope making during the 1920s, when he lived in Springfield, Vermont. He and James Hartness, president of the company where Porter worked, trained local machinists to make telescopes literally with their own hands. Porter's legacy remains a revered theme at the granddaddy of all stargazing gatherings, Stellafane, held each summer in Springfield.

Porter's combination of engineering smarts and insightful artistry caught the attention of George Ellery Hale, who was gearing up to build the world's telescope atop Palomar Mountain. So Porter headed west in 1928, to the California Institute of Technology in Pasadena, California, to work on the mammoth scope. 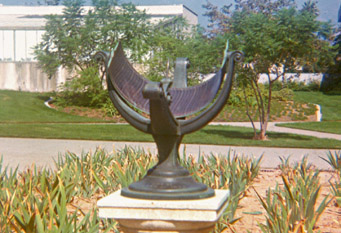 The now-missing Porter sundial as it appeared on the Caltech campus sometime before 1975. Click here for an enlarged view.

The artist in Porter emerged in many forms, not the least of which were a series of beautiful yet functional brass castings for telescopes and sundials. One of these creations, an elegant sundial measuring about 24 inches across, graced a well-traveled courtyard on the Caltech campus for decades.

Although a Caltech undergrad a few years earlier, I have to confess that I have no recollection of Porter's work. Then again, that place demands so much academic rigor that I did little while there besides study, eat, study, go to class, study, and occasionally sleep. 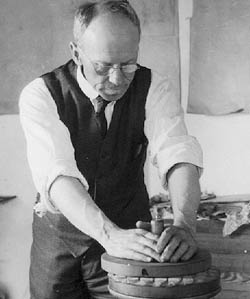 Russell Porter championed mirror grinding and telescope making during the 1920s, when he lived in Springfield, Vermont.

But recent word out of Pasadena is that Caltech really wants the sundial back. So I made a few inquiries, starting with Stellafane historian Bert Willard.

"I'm afraid I have almost no information about this Porter sundial," Willard told me. But it turns out that there's another prized Porter artifact lurking out there somewhere in the dark, seamy underground of stolen astronomical treasures: a watercolor painting by Porter of one of his remarkable "garden telescopes."

So now we have two detective mysteries to solve. Are you game to help reclaim these lost treasures? You can read more about the purloined Porter sundial in this recent issue of Caltech News. Caltech's alumni association hopes one of you knows its whereabouts; if you do, contact executive director Andrew Shaindlin.

And Bert Willard has created a web page about the missing painting.

I started at Caltech in 1978, but have no memory of the sundial.

Have they checked in the steam tunnels?

How sad. I remember reading about the missing artwork some years back, and now to learn of this. Porter was a genius, and hopefully these items will be returned for the enjoyment of all who love astronomy.

I recall that around 1975 copper prices were very high like they were recently. I would hate to think that the sundial suffered the same fate that a lot of stolen bronze plaques recently experienced.

For those people who have, just return!! It isn't yours nor will it ever be!! It was Caltech's property and will remain Caltech's Property!! I wonder, do people get the idea that stealing is wrong! Well ya hear all these robberies now a days and ya kinda think... THEY DON"T GET IT!!! It's sad. Even for momuments to be stolen, it's sad.