It's beginning to look as if astronomers will arrive at one of two possible outcomes this week in their much-publicized attempt to agree on a formal definition of the word "planet." Either they will fail to reach a consensus, or they will adopt a definition that is rather different from the one proposed last week — and that kicks Pluto out of the planet club. 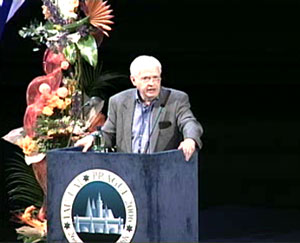 That's the way it seems after a day of tumultuous discussions at the general assembly of the International Astronomical Union (IAU) in Prague, Czech Republic. As hundreds of astronomers filed into the first of two sessions devoted to the debate today, they were handed copies of a new definition that addressed some of the key problems with the original one proposed last week by a committee of seven distinguished astronomers, historians, and writers. In particular, it incorporated some elements of an alternative definition put forward by planetary scientists last Friday.

But after an hour of sometimes heated discussion, a straw poll indicated little support for the revised wording. So the IAU's planet-definition committee, led by Harvard astronomer-historian Owen Gingerich, spent the afternoon making further changes. When they presented a new draft during a second discussion session late in the day, signs of a consensus began to emerge, even as astronomers continued to wrangle over various fine points in the text.

The key provision of the twice-revised definition reads as follows: "A planet is a celestial body that (a) has sufficient mass for its self-gravity to overcome rigid-body forces so that it assumes a hydrostatic-equilibrium (nearly round) shape, and (b) is the dominant object in its local population zone, and (c) is in orbit around the Sun." (For now astronomers are trying to define what "planet" means only in our own solar system, avoiding the complication of planets around other stars or, worse, floating in free space.)

Whereas last week's wording proposed a class of Pluto-like planets called "plutons" in highly elongated, tilted, 200-plus-year orbits, the new wording instead defines a class of hyphenated "dwarf-planets" that meet criteria a and c above, but not b. This class includes Pluto, the slightly larger object provisionally known as 2003 UB313, and probably several other icy bodies in the Kuiper Belt beyond Neptune. It also includes Ceres, the biggest of the rocky asteroids circling the Sun between the orbits of Mars and Jupiter.

Gingerich and his team backed off the term "pluton" for two reasons: geologists already use that word to refer to a certain type of igneous inclusion, and in French and several other languages Pluton is the name for Pluto itself. Somewhat confusingly, "plutons" were meant to be a special class of planets, whereas "dwarf-planets" are meant to be objects that share some of the characteristics of planets but are not to be mentioned in the same breath as Mercury, Venus, Earth, Mars, Jupiter, Saturn, Uranus, and Neptune.

"I think that today will go down as 'the day we lost Pluto,'" wrote astronomer Jay Pasachoff (Williams College, Massachusetts) in an e-mail message sent from Prague. "Sentiment seemed strongly against retaining Pluto [as a planet] for historical or sentimental reasons."

The wording of the proposed definition will no doubt continue to be refined over the next two days. Then, on Thursday afternoon, it will be put to a vote among the assembled members of the IAU, at which point we'll either know what a planet is or have to steel ourselves for three more years of debate — the next IAU general assembly convenes in August 2009 in Brazil.