Combining data from the deepest images ever taken in visual/infrared wavelengths and X-rays, astronomers have discovered some of the earliest black holes in the universe. Formed only 800 million years after the Big Bang, these baby black holes shed light on galaxy formation, and allow us to advance our knowledge on the evolution of the infant Universe. 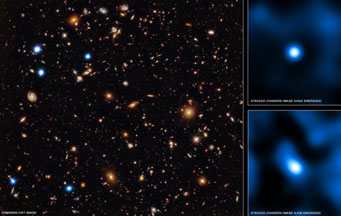 The observations combine Hubble‚Äôs ultra-deep field images showing over 200 galaxies at a red shift of 6 to 8 with a more recent deep-field image from Chandra, called The Chandra Deep South. This image was captured, when in an attempt to scout for black ho

The observations combine the latest versions of the Hubble Ultra-Deep Field and the Chandra Deep-Field South Survey.

The Hubble image reveals many ancient galaxies, but the Chandra image isn't "deep" enough to resolve individual black holes, despite its 4-million-second (46-day) exposure time. To overcome that limitation, a team of astronomers led by Ezequiel Treister (Institute of Astronomy, Hawaii) stacked the X-ray images for 250 separate galaxies to yield a hyper-deep image of an "average" galaxy. They concluded that many or most of the ancient galaxies in the Hubble image do indeed contain black holes. The black holes themselves are invisible to the Hubble because they're enshrouded in thick clouds of gas and dust, but they're (faintly) detectable by their X-ray signatures.

“This is not a baby step, but a big step,” Treister said, when he unveiled his observations at a NASA teleconference on Wednesday. “We were very excited to discover these early black holes, and were very surprised to see that they were heavily obscured.” 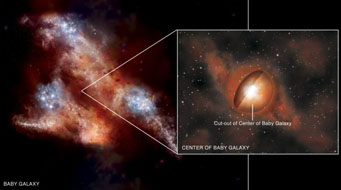 An artist's conception of an early galaxy forming when the universe is less than a billion years old. 250 such galaxies were located in Hubble's ultra-deep field image. Recent research shows that the massive black holes in the vortex of these galaxies evolve simultaneously.

The sheath of gas and dust burying these infant black holes will also help cosmologists advance their knowledge of galactic formation. For long, they have battled the fundamental question of what came first: black holes or the galaxies around them. One popular model suggests that an early star must have exploded as a supernova to create a voracious seed black hole that gravitationally amassed enough gas to support an entire galaxy of stars around it.

But in 2006, Priyamvada Natarajan (Yale University) and her post-doc Giuseppe Lodato proposed a model that doesn't rely on supernovae, suggesting that the earliest black holes and stars may have formed in tandem from disks of accreting gas.

While this new discovery is a breakthrough for cosmology, Natarajan believes that it was not surprising. “Both stars and black holes feed from gas,” she said. So early discs of gas accreting around dark matter could have spawned both black hole and star formation simultaneously. 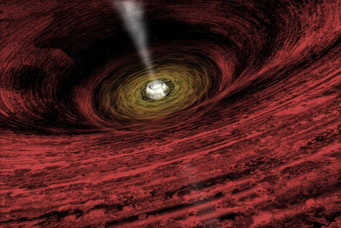 An artist's conception of a supermassive black hole enshrouded in gas and dust rapidly expanding in the early universe.

Chandra’s recent observations also shed light on a fundamental process called re-ionization that occurred in the infant Universe. (See "The End of the Cosmic Dark Ages" in the May 2011 issue of Sky & Telescope.) In the very first years after the Big Bang, the universe was heated by the cosmic microwave background radiation and filled with hot, ionized plasma. As it began to expand and cool, neutral hydrogen atoms began to form within this plasma, creating a dense cosmic fog that was opaque to light. This dark age of the Universe is believed to have ended when pockets of accreting dark matter, caused gas to condense around them and set off the first fusion reactions that birthed stars. The heat and light from these reactions catalyzed a process of re-ionization that cleared the fog and made the universe transparent to light again.

When Natarajan designed her 2006 model, she came across a fundamental problem. While starlight is believed to have triggered the process of re-ionization over long periods of time, these voracious baby black holes would have cleared the cosmic fog faster than the process is supposed to have occurred. To explain this, she suggested that these black holes would be heavily enshrouded in gas and dust.

“I am very excited that we finally have observational data to support the theory,” she said. “It is a dream come true for any theorist.” However, she believes that this data does not necessarily make her model the more dominant one. “I personally think both models work in nature,” she said.

I cannot help but wonder if perhaps some of those huge, early black holes are primordial. That is, they may have existd since the big-bang.

Consider that time slows down for an object entering the event horizon and time continues to slow as it falls towards the singularity.

Q: how long does it take for a black hole to form? In theory the collapsing matter will experience time dilation and become frozen, never forming a singularity which raises the issue of how could black holes form in the first place? Not enough time has elapsed since the postulated big bang event nearly 14 billion years ago to form black holes.