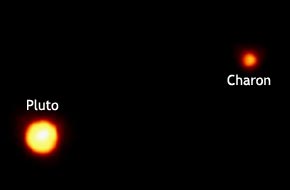 Despite being only 0.9 arcsecond apart, the "dwarf planet" Pluto and its largest moon, Charon, appear well separated in this Hubble Space Telescope image snapped in 1994.

It's not over yet.

In the past week a small but growing group of scientists made their first formal attack against the
International Astronomical Union's August 24th resolution that left the solar system with eight planets and downgraded Pluto to a new class of objects known as "dwarf planets."

On Thursday two heavy hitters in the planetary-science community — Mark Sykes, director of the Planetary Science Institute, and S. Alan Stern, an executive director of the Southwest Research Institute and leader of the Pluto-bound New Horizons mission — unveiled a petition formally disputing the new definition. The petition, signed by more than 300 of the world's leading space scientists, states, "We, as planetary scientists and astronomers, do not agree with the IAU's definition of a planet, nor will we use it."

The signatories call for a "better definition" of a planet and ask that the method to determine that definition includes more input from the global astronomical community. According to the petitioners, only about 4% of the IAU's nearly 10,000 members were present in Prague to vote on the resolution. In a prepared statement Sykes wrote, "A more open process, involving a broader cross section of the community engaged in planetary studies of our own solar system and others, should be undertaken."

Says Stern, "From the number of signatories that the petition received in a few days, it’s clear that there is significant unhappiness among scientists with the IAU’s planet definition and that it will not be universally adopted by scientists and textbook writers."

Other battle lines are being drawn as some scientists are questioning the IAU's authority in this matter altogether. The director of the Center for Space Exploration Policy Research, Mark Bullock, released the following statement: "A key public-policy question is who has the social mandate to alter the definition of something as fundamental as a planet. Scientists have in the past vested the IAU with authority to name asteroids and other planetary objects. However, the word 'planet' has cultural, historical, and social meaning and as such requires much broader discussion and consensus than those required for the naming of astronomical bodies."

Meanwhile the chair of the American Astronomical Society's Division for Planetary Sciences, Richard G. French (Wellesley College), urged the group's more than 1,200 members to recognize the authority of the IAU to render their decision and reiterated that refinements to the definition are desired. In a letter to the DPS community, he writes, "There is still work to be done, too, in constructing a definition that is generally applicable to extra-solar planetary systems. These and other changes, radical or moderate, presumably will be addressed at the next IAU General Assembly in Rio de Janeiro in 2009, and the DPS community will continue to be involved in all stages of this process."

You can read the Sykes-Stern petition, including the list of signatories, at http://www.ipetitions.com/petition/planetprotest.