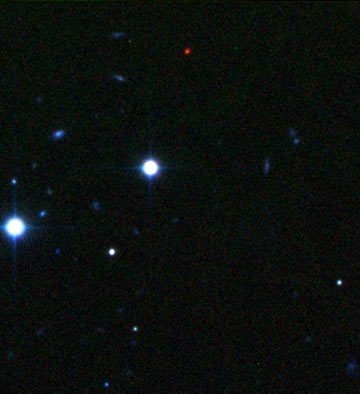 In this color infrared image from the Canada-France-Hawaii Telescope, the red dot at top center is the newly discovered brown dwarf CFBDS 0059 in Cetus. It's not much hotter than your oven.

Everyone who gets into astronomy soon learns the sequence of stars' spectral types. They run from hot to cool, from blue to red: O B A F G K M. Soon after the first brown dwarfs were discovered in 1995, astronomers extended the red end with two new, cooler spectral types: L and T.

This morning, astronomers with the infrared Canada-France Brown Dwarf Survey (CFBDS) announced finding the coolest brown dwarf yet. It's a free-floating body in interstellar space with a temperature of only 350° Celsius (660°F). That's not even red hot. You can set your oven nearly that high (on its self-cleaning setting) and it will still look pitch black even in a darkened room. If you had infrared vision, however, you'd see the oven glowing deep red, rather like the dot above.

The new object isn't the first sub-red-hot brown dwarf, but it's probably the first that's cool enough to show ammonia in its spectrum (at least the researchers are pretty sure they see signs of ammonia). And that places it in a new proposed spectral class: Type Y.

The letters L, T, and Y were chosen not because they stand for anything, but merely because they don't conflict with old, defunct spectral types that still exist in the historical literature, or with specialized spectral-sequence offshoots. The latter include type W (superhot "Wolf-Rayet" stars that are as hot as O but have blown off their hydrogen envelopes, giving them a different spectral signature); type C (carbon-rich red giants; C replaces the former carbon-star classes R and N); and type S (red giants in which zirconium oxide replaces titanium oxide dominating the spectrum). See our amateur astronomer's guide to the spectral types of stars (and those of you who've read this far will want to know this stuff!).

The difference between a "star" and a "brown dwarf" actually has to do with mass, not spectral type. A true star, even a small, cool M dwarf, stays hot — because it has enough mass (and hence internal pressure) to ignite the normal hydrogen-fusion processes that light, for instance, the Sun. This is possible with as little as about 0.08 of the Sun's mass, or about 80 Jupiter masses. A brown dwarf is an object with less mass than that. So after it forms, it just gradually cools down.

Spectral type, however, is about an object's temperature (mostly), not its mass. So a brown dwarf, right after it forms, can be hot enough to shine brightly with a type-M spectrum just like a red-dwarf star, while an older brown dwarf with the same mass may have cooled enough to display the L signature, or T (with methane), or Y (with methane and ammonia). The fact that the division between stars and brown dwarfs often falls at the division between spectral classes M and L is really just a coincidence.

The new discovery (named CFBDS J005910.83–011401.3 for its celestial coordinates, or CFBDS 0059 for short), is about 40 light-years away in Cetus. Its discoverers estimate that is has a mass of 15 to 30 Jupiters, based on spectral indicators of its surface gravity, which means it's certainly no record-setter in the low-mass department. But if it's that cool, it must be pretty old: 1 to 5 billion years for a brown dwarf of that mass, the researchers say, based on evolutionary cooling models.

The researchers are also calling it a link between brown dwarfs and giant planets. In terms of temperature and infrared emission, that's certainly true. Go further down the temperature scale and you bump into Jupiter and Saturn. Both of these emit a little internal heat of their own, left over from their long-ago time of formation. The heat comes out as a very weak infrared glow (see gorgeous deep-infrared image of Saturn by Cassini), for which no one has yet invented a spectral type.

For more about the new find, see the group's press release and journal article.

I don't get where you got the temperature 230 degrees. In the press release you refer to it states 'its temperature is about 350°C'. It seems to me you have made an error somewhere.

OK, while we're in the process of correcting errors: looks like this star is not in Pisces. I read elsewhere it's in Cetus and its coordinates would indicate that's correct.