For four decades, one of the rock-solid "truths" of planetary science has been that the Moon contains no water. Nada, zip, zilch. Not only did the lunar samples returned by Apollo astronauts contain no trace of water, but they also lacked any minerals whatsoever hinting that water existed in the distant past.

This sure bet started to get a little dicey in the 1990s, when the Clementine and Lunar Prospector orbiters found tantalizing evidence that water ice might be stashed in permanently shadowed crater floors near the Moon's north and south poles. (That's what NASA scientists are hoping for when the LCROSS spacecraft and its spent rocket slam into the Moon on October 9th.)

More recently, reanalysis of some lunar samples by Alberto Saal and others turned up traces of water in little beads of volcanic glass, and from this they conclude that the lunar interior might contain water at abundances of up to 745 parts per million — less than 0.1% — but not zero! (Here is a nice discussion of that work.) 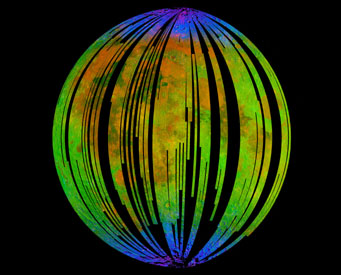 This nearly complete map, made at three infrared wavelengths by a NASA spectrometer aboard the Chandrayaan 1 spacecraft, reveals the presence of small amounts of water and hydroxyl (blue) on the surface of the Moon. Note the higher abundance nearer the poles. Click here for a larger version.

Well, now all bets are off! The September 25th edition of Science Express features not one but three articles announcing the discovery of water and its chemical kin, hydroxyl (OH), over much of the lunar surface. (Hydroxyl groups are what you get when water molecules lose one of their hydrogen atoms; the resulting OH typically binds with other compounds to form minerals like clays.)

The findings come from infrared spectra taken by three spacecraft: the recently lost Indian orbiter Chandrayaan 1; NASA's Cassini orbiter (which used the Moon for target practice before heading out to Saturn), and NASA's Deep Impact spacecraft, which in its new guise as an exoplanet hunter recently viewed the Moon to calibrate its instruments as well.

The spectrometers' detections were made at 2.8 and 3.0 microns, wavelengths that easily reveal the presence of hydroxyl groups and water molecules, respectively. These spectral windows are so sensitive that the 10-year-old Cassini detection was initially dismissed as contamination from traces of water within the instrument itself. And it took follow-up observations in June from Deep Impact to dispel any lingering doubts. 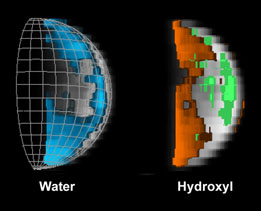 NASA's Cassini spacecraft observed the Moon on Aug. 19, 1999. This infrared maps shows traces of water and hydroxyl at all latitudes on the surface, even areas exposed to direct sunlight. For a larger version and more details, click here.

But don't get too excited — some major caveats are in order! First, this detection applies only to the uppermost film of dust particles atop the lunar surface, because that's all that the spectrometers can "see" in the infrared. (Conversely, the water ice thought to lie at the lunar poles must be at least several inches deep.)

Second, the three teams admit that they don't know how much water is there, because it's difficult to cancel out instrumental quirks and the effects of changing illumination angles on the lunar surface. Carlé Pieters and many colleagues, who built the Moon Mineralogy Mapper aboard Chandrayaan 1, estimate that the water's abundance might be 0.02% to 0.1% — not exactly damp!

Finally, it's not clear where the water comes from. Usually cosmic chemists invoke the comets and water-rich asteroids that occasionally strike the Moon. Some of the resulting water vapor becomes infused in the dusty lunar regolith, the thinking goes, with most of it ending up at the dark, cold poles. Spectral mapping does seem to show a stronger signal near the poles — but it's also widespread across the lunar surface. And the signal strength varies with time, prompting speculation that the water and hydroxyl are byproducts of solar-wind-borne hydrogen interacting with oxygen-rich minerals in the lunar regolith.

NASA held a press conference last week to announce the findings, and the graphics from that are here. But I think you'll learn a lot more from the extensive blogs posted by Emily Lakdawalla of the Planetary Society.

Sure NASAâs M3 (Moon Minerology Mapper) instrument which got a free piggyback ride on ISROâs (Indian Space Research Organization)Chandrayaan 1 found traces of water, however it was ISROâs MIP (Moon Impact Probe) which found traces of water a month before the M3 did. Furthermore I would like to add that there is no doubt within ISRO that the water on moon is generated on moon itself. Since as Indiaâs mission has also found for the very first time water molecules in the sunlight region of the moon, up until now all moon missions had speculated of trace water elements in the moons polar region only