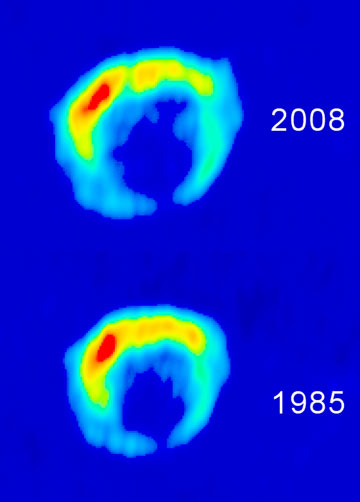 In these radio images from the Very Large Array, the supernova remnant G1.9+0.3 expanded by about 15% in just 23 years. The remnant is about 1.5 arcminutes wide. Click on the image for animated view.

When was the last supernova in the Milky Way?

The last one seen was "Kepler's Supernova," which blazed as bright as Jupiter in southern Ophiuchus for several weeks in 1604.

But we know that interstellar dust hides most of our Milky Way galaxy from view. Moreover, supernovae observed in other galaxies suggest that they should happen in ours a lot more often than we see. Current estimates are that one happens about every 50 years on average.

Today an international team of astronomers announced finding the youngest Milky Way supernova remnant yet. The remnant, near the middle of the galaxy, is indeed hidden by interstellar clouds — but it shows well in radio images made with the Very Large Array (VLA) radio telescope in New Mexico, and in X-ray images from the Chandra X-ray Observatory in orbit.

The images have the shape and spectral characteristics of a supernova shock wave. But the exciting part is that the remnant (known as G1.9+0.3) is expanding right before our eyes. Observations by the VLA in 1985 and 2008 show that it enlarged about 15% in the intervening 23 years.

Working backward, this means Victorian astronomers would have witnessed the supernova no more than about 150 years ago, if they'd had a clear line of sight. If the shell's expansion has been decelerating, as seems reasonable, the supernova could have happened as recently as 1900.

G1.9+0.3 appears less than 2° from the galactic nucleus. If it really is about the same distance from us as the Milky Way's center, it is expanding at 15,000 kilometers per second, or 5% of the speed of light — unprecedented for a supernova remnant.

The group's discovery paper will be published in the Monthly Notices of the Royal Astronomical Society.

The Chandra X-ray Center has put out its own press release with X-ray images and other good graphics.

About 250 supernova remnants are known in the Milky Way. Most are known only by their radio emission. Unlike all others, G1.9+0.3 is so young that it's still brightening in radio as it plows through the interstellar medium.