When I returned from a week in Australia (to help welcome home Japan's Hayabusa spacecraft), my overloaded In Box was chock full of fascinating astronomy news.

Among the most fascinating was the publication of results about lunar water. Now, those of you who read S&T's blogs regularly know that H2O on the Moon has been big news recently. Last year teams of researchers used data from three different spacecraft to determine that a microscopic film of water molecules or hydrated minerals or both cling to much of the lunar surface. Then, on October 9th, NASA vaporized some lunar frost by slamming its LCROSS probe into a permanently shadowed crater.

Add to that an announcement in early March that numerous small craters surrounding the Moon's north pole must have lenses of nearly pure water ice barely buried beneath their frigid, sunless floors. This finding came from probing the lunar terrain with a NASA-sponsored radar sounder aboard the Indian spacecraft Chandrayaan 1. According to Paul Spudis (Lunar and Planetary Institute), the implication is that up to 600 million tons of ice could be stashed under the craters. 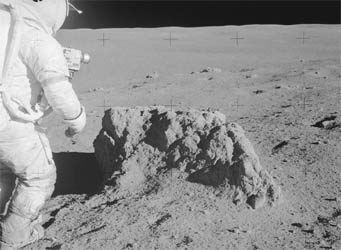 Astronaut Alan Shepard takes stock of a rock outcrop during the Apollo 14 mission.

OK, OK, we (now) know there's a little water on the lunar surface, but where'd it come from? In the past, most planetary specialists would have responded, "It must come from comets and water-rich asteroids." And why would they be so certain? "Because," they'd quickly reply, "none of the Apollo or Luna samples contain even the slightest evidence of water." For example, there's no rust in those lunar rocks — none of the iron has been oxidized to its ferric (Fe3+) state, a hallmark of water at work; it was either metallic or ferrous (Fe2+).

Presumably lunar rocks ended up so utterly dry because the Moon collected from a huge splash of white-hot vapor and debris kicked into space when a Mars-size protoplanet slammed into the infant Earth some 4½ billion years ago. The geochemical thinking goes that all of the easy-to-vaporize stuff — water, for instance — would have escaped before the rocks cooled.

But the "dry Moon" paradigm took a hit last week when researchers led by Francis McCubbin (Carnegie Institution of Washington) announced that they'd found water (in the form of its ion hydroxyl, OH) in assorted samples from the Apollo 14 mission. The "steaming gun," so to speak, is the calcium-rich mineral apatite, which incorporates a hydroxyl (OH) radical into its crystals. 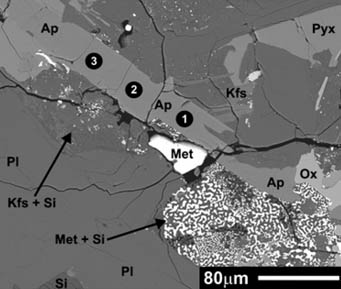 This electron-microscope image shows apatite grains (labeled Ap) among other minerals in an Apollo 14 sample. The circled numbers mark locations where the apatite's composition was assayed.

In some specimens the researchers found that the apatite grains contain 1% water or more. Their findings, which appear in June 7th's "early edition" of the Proceedings of the National Academy of Sciences, suggest that H2O-laced lunar magma must have been ubiquitous and that the Moon could contain water at an abundance of 5 parts per million (ppm) or more. This might not sound like much, but previous estimates had been orders of magnitude lower.

So why is the water's presence is coming to light now, instead of right after the Apollo astronauts brought them back? As with so many laboratory techniques, today's technology is much, much better than it was 40 years ago. Moon specialist Paul Spudis (Lunar and Planetary Institute) points out that the ion microprobe used by McCubbin's team targeted spots on the apatite crystals only 8 microns across and yet measured the water content within them to an accuracy of 3 ppm.

By the way, this isn't the first evidence of water locked up inside the Moon. I'd be remiss if I failed to mention the work of Alberto Saal (Brown University), who in 2008 found water at up to 30 ppm in glass beads from an Apollo 15 sample. At the time Saal argued that models of the Moon's chemical and thermal evolution should now take the presence of water into account. He was right.

For a good overview of this discovery and its consequences, read Spudis's blog on the subject.