It's a banner week for all things lunar.

First, don't forget that Saturday is the first-ever International Observe the Moon Night, for which a bunch of different organizations in and out of NASA have partnered to get your looking up at that big, bright, round thing in the sky.

Then, yesterday, a panel of lunar scientists described new global observations of the Moon acquired over the past year by NASA's Lunar Reconnaissance Orbiter. LRO isn't the only spacecraft to have orbited the Moon recently — the Japanese launched Kaguya, the Chinese sent Chang-e 1, and space exploration in India took a big step with Chandrayaan 1. But over the past year the spotlight has been on LRO and, in particular, the ability of its high-resolution camera to pick out long-ago (and sometimes long-lost) spacecraft from the early decades of lunar exploration. 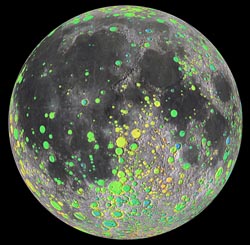 Colored circles mark the locations of lunar craters at least 12 miles (20 km) across. The dark lunar maria have far fewer large craters because their surfaces are significantly younger than the lunar highlands. Green interiors are near the equivalent of "sea level" on the Moon; yellow is slightly higher in elevation and blue slightly lower. Click here for a larger version and here to see animations of these results.

One LRO instrument that's been quietly amassing observations is the Lunar Orbiter Laser Altimeter. By firing 140 ultrashort pulses of laser light at the surface per second and precisely timing their reflections, LOLA has amassed 2½ billion altitude measurements in its first year of operation. That's enough coverage to create a topographic map of the entire globe. Combine that with a little 3D shading, and the result is a mind-blowingly detailed "relief map" that reveals every nook and cranny on the lunar surface — without having to worry about the vagaries of lighting geometry, surface brightness, image artifacts, and the like.

A team led by James Head III (Brown University) has used the ever-improving LOLA database to identify every crater on the Moon, near- and farside, at least 12 miles (20 km) across. The total, in case you're curious, is 5,185 craters. When Head's team mapped the distribution of these craters, they found that some areas of the lunar highlands are completely saturated with impacts. In other words, craters are packed so closely together that every new one destroys an old one.

Most of those hits came during the Moon's first billion years of existence. But planetary scientists have long debated whether the impacting asteroids and comets come in an assortment of sizes — what's termed a size-frequency distribution (SFD) — that's always been the same. Some geologists, most notably Robert Strom (University of Arizona), have hypothesized that there weren't nearly as many really big boppers in the mix later on as there were initially. Others, most notably Gerhard Neukum (Free University, Berlin) have argued that the SFD has remained the same even though the impact rate diminished over time. 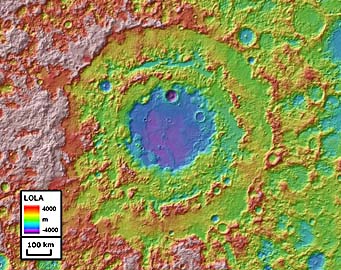 Roughly 600 miles (900 km) across, the large multiringed basin Orientale stands out dramatically in this topographic map created by the Lunar Orbiter Laser Altimeter. Click here for a larger version.

What the LOLA data reveal is that Strom had it right: the older, heavily cratered highlands have more big craters, compared to small ones, than do the younger surfaces covering the maria. The transition, Head's team suggests, probably came about when the Moon's last giant basin, a 600-mile-wide multiringed bull's eye called Orientale, became forever etched in the lunar landscape about 3.8 billion years ago.

The other two Science papers describe LRO's mapping of the Moon in a whole new light. An instrument called Diviner has been taking the Moon's temperature by mapping the thermal (heat) radiation coming from its day and night sides. For example, about this time last year, the Diviner science team announced that temperatures at and near the lunar poles are among the coldest ever measured in the solar system.

Now attention has turned to Diviner's ability to record the infrared "fingerprints" of different minerals in the lunar surface. A team led by Benjamin Greenhagen (Jet Propulsion Laboratory) reports that overall the Moon's composition is much as geochemists have believed. There's old, heavily cratered "crust" consisting of anorthosite, a mix of low-density silicate minerals largely lacking dense metals like iron and magnesium; and there's younger, metal-enriched basalt covering the maria. 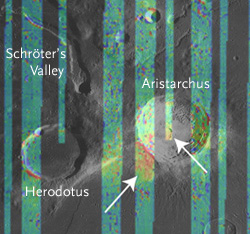 But Diviner has also turned up some oddities here and there. For example, geochemists had hoped that an enormous basin on the lunar farside, kludgily named "South Pole-Aitken," had punched down deep enough to dredge up chunks of the lunar mantle. If some of that lay atop the lunar surface, waiting to be plucked by some future lander, it could clear up many unknowns about how the Moon came to be. But no such luck, say Greenhagen and his team: Diviner doesn't see any evidence for pristine mantle material anywhere on the lunar surface.

Timothy Glotch (State University of New York) and others report that a smattering of surface patches appear to be highly enriched in silica (SiO2). Some of these exposures probably result from volcanoes spewing the last-to-solidify dregs of subterranean magma reservoirs. Others, notably a silicic spot near the already-weird Aristarchus, might be telling us that a near-surface hotspot caused the anorthositic crust to melt and erupt onto the surface.

(As an aside, "silicic" is a great word — one that seems to be all consonants.)

None of these LRO results are turning lunar science upside down. But they will alter how planetary scientists approach questions of the Moon's formation and history. Moreover, this "renaissance of understanding," Head notes, "opens up the whole Moon to future human and robotic exploration."

Learn more about yesterday's announcements by clicking on the NASA press releases here and here. The new results appear as a trio of reports in the September 17th issue of Science.

Minor quibble: how is "silicic" almost all consonants? It has a strict alternation of consonants and vowels. Just like "syzygy," if you count y as a vowel.

More seriously, the lunar elevation data is great. So when will it be available as a DEM (Digital Elevation Model)? Just try to find DEM data either at NASA or USGS! You can download colored elevation data from Map-a-Planet, and there are elevation data sets coded as pixel images (but no software to read them!) but plain vanilla DEM data that you can interpret with any standard GIS software? Not that I can find. I just searched for "venus digital elevation model." The very first hit was someone asking if there were any plans for one. The second was a link to a paper describing high resolution DEM's, but no links to the data itself.

This is just plain slovenly and inexcusable.

Steve, you wrote: "You can download colored elevation data from Map-a-Planet, and there are elevation data sets coded as pixel images (but no software to read them!)". ...This is not difficult. If you have any software skills at all (seriously), you can write your own software to do this. Th height data is simply proportional to the gray level of each pixel. If you can't code at all, then hire some kid to write said software (it's a very simple coding task). Or finally you could just wait a while, and someone else will do it for you. This data is fairly new. The only DEM available for the Moon until just last year was from the Clementine probe and it was very low resolution and low accuracy --better than nothing but only just. There is now a very nice dataset from the Japanese Kaguya mission which has, within the past year or so, replaced decades of lunar limb work for people who do lunar occulations (IOTA). It's a nice DEM and you can use it to generate lunar simulations if you combine it with an albedo map. Like I say, it's only been publicly available for about a year. Eventually it should be superceded by a much more detailed DEM from the LRO mission. I feel your pain though. You put your quarter in the Internet and you expect to get your candy. If you don't, it can be very frustrating. As I say, the easiest option is patience, sometimes known as procrastination. If you wait a while, even just a couple of months, someone will do the legwork for you... You concluded your note by writing "This is just plain slovenly and inexcusable." I couldn't agree more. Personally, I think the scientific community should serve me breakfast in bed. What are they doing wasting their time on research when there are people like me waiting on bacon and eggs?! And then there are people like you who, right now, right this very second, need lunar DEM data. Come on, science: feed us!! 😉

Oh, and if we're ordering breakfast in bed, make mine a banana, a box of Entenmann's chocolate donuts, and a cup of coffee w/ sugar and half&half.