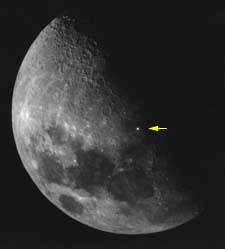 Leon H. Stuart's controversial photograph, taken at 2:00 Universal Time on November 15, 1953, records a bright 'star' seen against the lunar disk. With an estimated magnitude of –1, the flare persisted for at least 8 seconds. Stuart used an 8-inch f/8 reflector and a ½-second exposure on red-sensitive Kodak 103aF3 film.

On the evening of November 15, 1953, amateur astronomer Leon Stuart simply wanted to test a new camera. But the evening turned unexpectedly eventful when, after taking his fourth and final image, Stuart glanced down at the camera's focusing screen and spotted a starlike pinpoint of light near the Moon's terminator. Stunned, he rushed to the darkroom and quickly found the bright flare on his hastily developed film. To him, it was obvious that the brightening represented the impact of a large meteorite on the lunar surface.

Stuart later published his picture in The Strolling Astronomer. Although dismissed by skeptics as an artifact, his controversial claim recently caught the attention of astronomer Bonnie J. Buratti (Jet Propulsion Laboratory), who decided to investigate. She and Lane L. Johnson, a student at Pomona College, began scrutinizing high-resolution images of the Moon taken in 1994 by the Clementine spacecraft for evidence of a freshly formed crater near the center of the Moon's face.

And they found one: a fresh-looking splash about 1½ kilometers across between the large craters Schröter and Pallas at 3.88° north, 2.29° west. Moreover, the bright patch is distinctly bluer than its surroundings, which lunar scientists consider the hallmark of a feature too fresh to have been "weathered" by the solar wind. 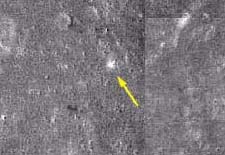 This fresh-looking lunar crater (arrowed) appears significantly brighter, and thus inherently bluer, in a mosaic of blue-light and near-infrared images from the Clementine spacecraft. The colliding object that formed the crater was roughly 20 meters across, and it struck the Moon with the kinetic-energy equivalent of 500,000 tons of TNT.

Buratti and Lane estimate the crater's diameter at roughly 200 meters, which would result from an impactor some 20 meters in diameter — a reasonable match, they argue, both to the flash's estimated energy and to the few-times-per-century likelihood that something of such a size strikes the Moon. The researchers feel confident that, after 50 long years of uncertainty, Stuart has finally been vindicated. Their results are published in the January 2003 issue of Icarus.

However, one unresolved issue concerns the flash's duration: it lasted too long. Stuart did not see the event's beginning or end, but his write-up suggests that the bright spot remained in view for at least 8 seconds. "That's a problem," comments cratering specialist H. Jay Melosh (University of Arizona). The impact's explosive power would have created a white-hot fireball expanding at 10 km or more per second. So an 8-second flash corresponds to an incandescent cloud of vaporized rock — and a corresponding crater — at least 80 km across.

Buratti counters that the fragments of Comet Shoemaker-Levy 9 blazed for several seconds when they slammed into Jupiter in 1994. Stuart's negative purportedly shows a faint halo around the flare, which Buratti speculates might signify an expanding shock wave or a radiating blob of molten material. In 1999, video cameras recorded several flashes on the Moon during the Leonid meteor shower, but each of those, Melosh says, lasted just a few milliseconds.

Was Stuart fooled by a bright "point" meteor, one heading directly toward his Tulsa, Oklahoma, backyard and thus leaving no streak in the sky? Buratti dismisses that idea as highly unlikely, because the photographed spot appears small and perfectly round. Besides, she adds, "The probability of a point meteor appearing on the leading side of the Moon is about one in 650,000." And meteors are generally rare in early evening, when Stuart snapped his famous frame. Nor could it have been due to a passing satellite, as the Space Age had not yet begun.

"This is the only record of a large impact on a solid surface," Buratti insists. But if she's right, and Stuart's account stands, then our understanding of impact physics will require significant reworking. "Whatever it was," comments Peter G. Brown, who researches meteor phenomena at the University of Western Ontario), "it was a neat event."