The New Face of Mercury

Spacecraft encounters with planets always give me an adrenalin rush, and a just-concluded one on October 6th was no exception.

NASA’s Messenger spacecraft zipped past Mercury Monday morning (4:40:21 a.m. EDT for those of you who’re truly curious), brushing within 125 miles (200 km) of its Sun-baked surface, and the pictures recorded during the flyby streamed back to Earth early the next day. It’s an incredible landscape — cratered plains splashed with bright craters that will keep the mission’s geologists giddily busy for a long, long time. 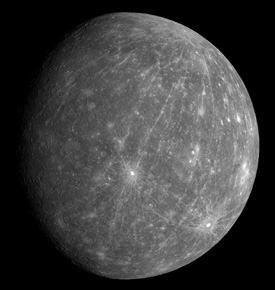 Taken on October 6, 2008 from a distance of 17,000 miles (27,000 km), this Messenger image of Mercury reveals an extensive and intriguing pattern of bright rays emanating from the fresh crater along the upper limb. Click on the image for a larger view.

They’re giddy because we’re finally seeing a side of Mercury that’s never been revealed at close range. Mariner 10 didn’t glimpse it despite three flybys in 1974-75, and Messenger itself was looking elsewhere during its first visit back in February. Astronomers back on Earth have tried mightily to glimpse this terra incognita using giant telescopes and radar. Amateur astronomers played a role too, with some genuinely useful results.

The image spotlighted at right just fascinates me. Click on the image to enlarge it, and then take a good, long look. The very bright crater just below center, named Kuiper, had been spotted by Mariner 10, but not the crater splash along the limb at upper right. What’s caused the incredible web of thin, stringy crater rays that are draped across the landscape?

I can’t wait for the mission’s geologists to explain how debris ejected from a crater can stripe the surface so uniformly for hundreds of miles. And I suspect they’ll puzzle it out soon. After all, this picture was taken by Messenger’s wide-angle camera about 90 minutes after the spacecraft passed closest approach to Mercury, when the spacecraft was some 17,000 miles (27,000 km) away. One can only imagine (for now) all the exquisite details revealed by its telephoto camera from closer in.

Maybe I’ll get some answers for you next week, when I head to Cornell University to attend a major meeting of planetary scientists. Messenger took 1,200 images during this visit, along with a host of other measurements that will help reveal the composition of Mercury’s surface and atmosphere, the state of its magnetic field, and (fingers crossed) the structure of its interior.

As incredible as these images look, I keep having to remind myself: “Messenger really hasn’t gotten to Mercury yet.” Sure, it’s had two great flybys to date, and there’s a third next September. But this instrument-laden craft won’t really get down to business until it starts orbiting Mercury on March 18, 2011. That’ll be a Friday. Note to self: “Tell boss I’m busy that day.”

It reminds me of the far side of the moon. Of course there are a number of similarities between the two bodies, so it shouldn't be too surprising.

Your hinge of mixing astrometrics 'n science with zany humour and I-am-not-ashamed-of-my-geekiness makes me read your blogs.
Nice!

I guess the rays were produced by rocks sent horizontaly at close to orbilal speed by the impact and dust fell to the ground slowed down by the atmosphere that was at that time denser than it is today. On the Moon we see the same kind of rays from Tycho and one of them is out of axis. This could be explained if the ray was produced during the reentry after traveling all around the Moon while the Moon rotated.