A distant stellar explosion, the oldest of its kind, may help reveal the cause behind one type of supernova. 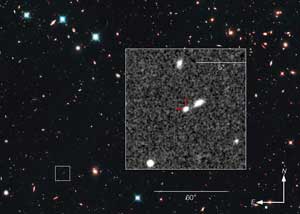 Deep in the box hides SN UDS10Wil, the most distant exploding white dwarf ever detected. The supernova exploded over 10 billion years ago. Click for a larger view.

Astronomers have discovered a supernova that is the oldest and most distant of its kind. At over 10 billion years old, the explosion, a Type Ia supernova dubbed “Wilson” by its discoverers, lies at a redshift of 1.9 and is now the farthest marker on astronomers’ supernova-based cosmic yardstick. With this yardstick astronomers measure distances in the universe and the universe’s expansion rate.

Officially named SN UDS10Wil, the record-breaker comes from the CANDELS+CLASH Supernova Project, a near-infrared observing campaign surveying the early universe with the Hubble Space Telescope. The team is naming the supernovae they discover after U.S. presidents; this one is after Woodrow Wilson, the 28th U.S. president.

The first I heard of this study was not from the press announcement but from my friend and former classmate, David Jones (Johns Hopkins University) — who happens to be the paper’s lead author. “We’ve never seen an object like this so early in the universe,” David said when I called him up to chat. The previous record-holder was found by a survey led by Saul Perlmutter (University of California, Berkeley) and announced only this January; before that the trophy belonged to Adam Riess (JHU, David’s advisor) and his team’s SN Primo.

In the late 1990s, Riess and Perlmutter were key players on competing teams that raced to announce the discovery of the accelerating universe. For that discovery they shared the 2011 Nobel Prize in Physics with Riess’s teammate, Brian Schmidt (Australian National University). But Riess cuts short the notion of any celebratory trash talk. “The fact that it’s a record-holder is nice, but what’s really interesting is the implications,” he says.

In fact, David explains, the team knew Hubble had the capability to find a supernova at these distances. “The exciting part,” he says, “is we haven’t found more of them.” The team thinks that the dearth of supernovae like Wilson in the early universe is an important clue to the origin of these massive explosions.

We know that Type Ia supernovae are the demolitions of white dwarfs, stellar cores left over from the fairly quiet deaths of Sun-like stars. White dwarfs are made up of matter that is under tremendous pressure and primed to explode if their masses exceed 1.4 Suns. There are two main models for how white dwarfs fatten up to reach that critical mass. One is that a white dwarf slowly sucks matter off a swollen, aging companion star called a red giant. In the other model, the companion is also a white dwarf, and the merger of the two dwarfs’ triggers the explosion.

While both scenarios result in the same event, and both may be sometimes true (observations support both models), the mass transfer model produces supernovae promptly and consistently. Thus, if most Type Ia’s are due to the mass-transfer model, the universe's supernova production line comes online around the same time the early universe is making vast amounts of stars — meaning there ought to be many supernovae at Wilson-esque ages.

But if colliding white dwarfs are the culprit, the universe's supernova production line turns on abruptly, when the closest binary systems begin colliding. That would mean that, as astronomers look farther into the universe and therefore deeper back in time, the number of supernovas should drop precipitously as we reach the early universe, with vast numbers of stars sitting around waiting around for the assembly line to start up.

This is what Wilson’s forlorn presence seems to suggest. “Honestly, I think a lot of us thought that we would see more,” David says. But SN Wilson is the only detection in their survey at those distances, a lonely candle in the early universe — which tends to favor the merger scenario.

Wilson’s other significant "so-what" concerns dark energy and could have rather — ahem — expansive implications. Since all white dwarfs explode at 1.4 solar masses, Type Ia supernovae are renowned for the consistency of their brightnesses. This characteristic helps astronomers determine how far away their host galaxies truly are, making them what team member Steve Rodney (JHU) calls “the most precise yardstick ever built.” Our knowledge that the expansion of today’s universe is accelerating rests upon these “standard candles.”

As it happens, SN Wilson’s distance and brightness match up with the trend seen in today’s universe, suggesting that Type Ia supernovae retain their consistency throughout time. “This is only a single object, so by itself, it doesn’t have a large statistical significance,” David says. “But of course, it is reassuring that it falls where it should.”

Being just a single event, SN Wilson also won’t have much bearing on the discrepancy between the cosmic expansion rate calculated from supernovae and the rate derived from the cosmic microwave background, Riess says.

Reference: D.O. Jones et al. "The Discovery of the Most Distant Known Type Ia Supernova at Redshift 1.914." The Astrophysical Journal, 10 May 2013.

Mark Zastrow, a graduate student in the astronomy program at Boston University, is also a science writer and photographer. Follow him (@MarkZastrow) on Twitter.

Well, somebody's got to say it -

Shouldn't it be unexpected to see exploding white dwarf stars at 10 billion years ago? With the age of the universe at 13.8 billion years, that leaves right around 3 billion years (or even less, since the Population III stars are expected to have been supermassive) for a solar-mass star to go through the entire main sequence of stellar evolution.