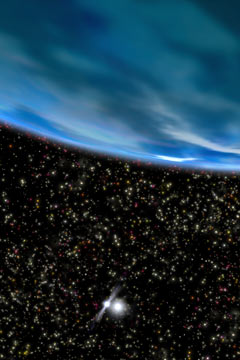 An artist's concept of the 2.5-Jupiter-mass planet distantly orbiting a pulsar/white-dwarf binary in the globular cluster M4.

Astronomers have determined both the mass and the tumultuous history of the planet in the strangest planetary system yet discovered.

The world in question is located in the ancient globular star cluster M4, which is the start of the mystery right off. Like most other globular clusters, M4 is very poor in heavy elements (materials other than hydrogen and helium), which are supposed to be the raw materials for starting a planet growing. The stars in M4 contain only 1/20 the proportion of heavy elements found in the Sun. Four years ago astronomers searched another globular cluster (47 Tucanae) for transits of stars by planets and found none. As a result, a lot of astronomers had begun to assume that globular clusters are planet-free.

Secondly, the planet in M4 is the only one known that orbits not a single star but a pair of them. And both of these stars are burned-out cinders — a small, dense white dwarf and an even tinier, denser pulsar. They orbit each other every 191 days about as far apart as Earth orbits the Sun. The planet wheels around them both much more slowly about 20 times farther out, at about the distance of Uranus from the Sun.

The pulsar was the key to everything. Astronomers discovered both the white dwarf and the planet by the slight advances and delays that their orbital motions induce in the pulsar's radio blips. Timings of the pulses are done so precisely that, over several years, they provide an extremely sensitive indicator of anything orbiting a pulsar. (A thousand-plus pulsars are being routinely timed, but only one other has so far proven to have planets: B1257+12 in Virgo, with three of them.) 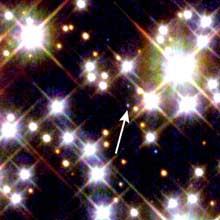 The white dwarf is the brightest thing in the B1620–26 system, arrowed in this detail from a Hubble Space Telescope image. Click for a wider view showing the location of this tiny field (green box) in the globular cluster.

The pulsar in M4 is named B1620–26 for its celestial coordinates in Scorpius. Steinn Sigurdsson (Pennsylvania State University), Harvey Richer (University of British Columbia), and three colleagues recently identified a tiny visible-light trace of the system on old Hubble Space Telescope images. The light is coming from the white dwarf. Its blue color and 24th-magnitude brightness, fitted to evolutionary models, indicate that it has an unusually low mass: 0.34 of the Sun's mass, agreeing with the likely mass deduced from the pulsar timings. Moreover, it has been a white dwarf for only 350 to 600 million years, while M4 is 20 to 35 times older.

"This places a constraint on the recent history of the triple system," write Sigurdsson and colleagues in the July 11th issue of Science. They say the only way it could have come into being is by a relatively recent swapping-off of objects between systems in the globular cluster's crowded core.

This is the scenario they propose. The planet (somewhat heavier than Jupiter) was born with the rest of the cluster 12.5 or 13 billion years ago. It orbited a normal, nearly Sunlike star, the one that is now the white dwarf. Some 10 billion years later this planet-star system had a close tangle with a binary containing a neutron star. The neutron star's original companion was flung off, the star with the planet replaced it in orbit around the neutron star, and the planet itself went into a wide orbit around the new pair. The story is plausible. Simulations indicate a 1 in 6 chance that a given planet will end up this way after such an interaction.

As the normal star later aged and evolved toward becoming a red giant, it spilled much of its matter onto the neutron star. This reduced its mass and spun up the neutron star to roughly its present fast rotation speed of 91 times per second. The normal star and the pulsar worked their way down into a tight, nearly circular orbit before the normal star evolved to its final white-dwarf state. Meanwhile the planet continued its wide orbit in safety. Several additional pieces of the puzzle fit right into this sequence of events.

The discovery "implies that planets may be relatively common in low-metallicity globular clusters," write Sigurdsson and colleagues, "and that planet formation is more widespread and happened earlier than previously believed." Apparently, the shortage of planets that was found in 47 Tucanae applies only to giant "hot Jupiters" that have migrated inward to orbit their stars very closely.

In addition, the astronomers refined the planet's mass: it weighs 2 or 3 Jupiters. This is an improvement because the pulsar-timing method alone gives only a minimum value, with the actual value depending on the unknown tilt of the planet's orbit to our line of sight. But knowing the mass of the white dwarf (from its color and luminosity), the astronomers could work backward to find the dwarf's orbital tilt, and from this, subtle orbital interactions observed in the pulsar timings gave the planet's own orbital tilt — and hence its mass.

The biggest implication here is that planets formed very early in the history of the universe, just a billion years after the Big Bang, even when there was little to build with but hydrogen and helium. At a NASA press briefing yesterday afternoon, planet-formation expert Alan Boss (Carnegie Institution, Washington) congratulated the team "for with one single identification, really raising a lot of answers and questions and solving perhaps some problems in the theory of planet formation."