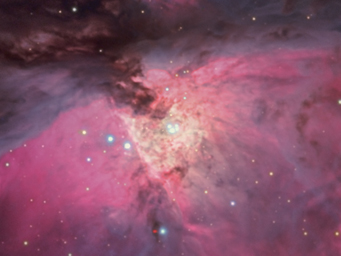 At the heart of the Great Orion Nebula lies the Trapezium, a tight knot of four stars (at center) visible in small telescopes. One of the radio sources recently measured by radio astronomers is a close companion of the Trapezium's component A, the rightmost star in this view. The other three radio sources are outside the Trapezium itself and don't show up in visible-light photographs like this.

You'd think astronomers would have all the key stats on the Orion Nebula (Messier 42) by now. Visible to the unaided eye, this deep-sky showpiece was first studied with a spectroscope in 1864 and first photographed in 1880. It's the first thing many people look at with their first telescope, and the last that William Herschel wanted to see with his last. The nebula has been studied at all wavelengths, harbors many variable stars, and is home to the Trapezium, the best-known multiple star in the sky.

Yet M42's distance was wildly uncertain throughout most of the 20th century, when estimates varied between 600 and 6,500 light-years! In recent years, astronomers have applied sophisticated techniques to gauge the nebula's distance, but the resulting uncertainties remained stubbornly high.

Now an international team of radio astronomers has nailed M42's distance — 1,350 light-years — with an uncertainty of less than 2%!

Karl Menten (Max-Planck Institute for Radioastronomy), Mark Reid (Harvard-Smithsonian Center for Astrophysics), and two colleagues accomplished this feat with the 10 dishes of the Very Long Baseline Array (VLBA). "We were lucky that the nebula contains many young stars emitting powerful synchrotron radiation," says Reid. At M42's distance, the glow of normal stars at radio wavelengths would have been hard or impossible to detect.

After locating four compact radio-bright stars within the nebula, the astronomers also found a very remote (extragalactic) radio source nearby, just 1.6° to the southeast. Using the VLBA allowed them to measure the angular separation (to within 0.00013 arcsecond) of this "fixed" source from each of those in the nebula. By repeating their measurements during 2005–07 in both March and September — that is, from opposite sides of Earth's orbit — they detected enough of a parallax shift to deduce a distance of 414 ± 7 parsecs, or very nearly 1,350 light-years.

The new result, announced in the November 2007 issue of Astronomy & Astrophysics, puts the Orion Nebula about 10% nearer than the best determinations by other methods. This means that the stars in this active star-forming region are about 20% less luminous (and therefore older) than previously assumed.

But the 10% inward shift is also eerily similar to that found by the European Space Agency's Hipparcos spacecraft for the Pleiades. A coincidence? Maybe, maybe not.

I guess that to receive the home loans from creditors you should present a good motivation. However, once I've got a auto loan, just because I was willing to buy a car.

What makes the Orion nebula M42 so interesting is that it is where we (or our Creators) come from, originally.