The Pillars of Carina

This past summer I was lucky to make not one but two trips to dark-sky locations in the Southern Hemisphere. I was all set to reacquaint myself with many southern-sky treasures, among them the beautiful Carina Nebula (NGC 3372).

Usually when this nebula is mentioned, thoughts immediately turn to its headliner, Eta Carinae, a massive and wildly unstable star that might just become the next supernova in our cosmic neighborhood. But the broader nebula in which Eta Carinae lies is a big draw all by itself. Brighter and larger than its better-known sibling in Orion, NGC 3372 is a riot of colorful gas whorls shaped by powerful ionizing radiation and outflowing winds from its brash young stars. 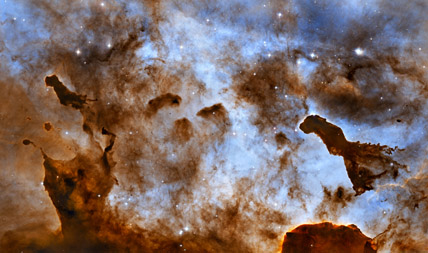 A close-up of the southern sky's Carina Nebula reveals several columns of cold gas and dust that are dissipating due to fierce radiation and outflows from nearby stars. Astronomers fashioned this dramatic scene, about 5 arcminutes across, from images taken by Hubble's Advanced Camera for Surveys in 2005 and 2010. Click here for a larger view.

My timing was great: on both trips NGC 3372 was high up in a Moonless sky. But my luck was rotten: every time I got out under a clear, wide-open sky I didn't have my telescope with me, and the one time I set up on a patch of hotel beachfront for some quality stargazing, the nebula had ducked behind a palm tree. Next time!

Fortunately, a new view released today from the Hubble Heritage team reminds us of this star factory's stunning beauty. It's a closeup of a section located about 6 arcminutes northwest of Eta Carinae.

These dramatic plumes, roughly 1 light-year tall, are towering columns of cold hydrogen gas and dust backlit by the bright nebula. They're reminiscent of the "Pillars of Creation" in the Eagle Nebula (Messier 16) made famous by the Hubble telescope 15 years ago.

Roughly 2° across, the stunning Carina Nebula has a declination of -60° — making it unobservable for most northern stargazers.

This new view is actually a combination of images taken with Hubble's Advanced Camera for Surveys in July 2005 and (after astronauts repaired it last year) in February 2010. The images isolate emission from twice-ionized oxygen atoms (O III), ionized nitrogen (N II), and excited hydrogen atoms (Hα).

Carina's pillars aren't a new find — for example, you can spot them easily in ground-based images. But they remind us that the Milky Way's star-forming cauldrons are among the most beautiful and arresting sights in the night sky.

This is a hauntingly beautiful picture as we near halloween. It looks to me like there is a smiling human skull just left of center in the close-up picture.