Every few weeks we'll get an announcement for the biggest, farthest, or brightest something in the universe. The latest finding from astronomers is the biggest medium-size black hole. Think of it this way: researchers didn't find the largest dog, but the largest Boston terrier. 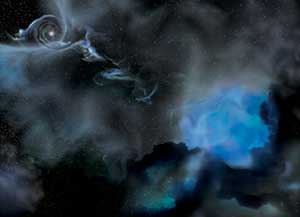 This artist's concept of the X-ray binary star system dubbed IC 10 X-1 depicts the biggest stellar-mass black hole (upper left), which weighs 24 to 33 times as much as the Sun. It's pulling gas from a companion Wolf-Rayet star (lower right).

Black holes come in two main size classes. The largest-known "supermassive" black holes lie at the cores of galaxies and have masses of billions of Suns. Scattered around the galaxy are "stellar-mass" black holes, the remnants of exploding stars that probably grow as they sweep up material.

On Tuesday, astronomers at the Harvard-Smithsonian Center for Astrophysics (CfA) announced finding a black hole in the nearby dwarf galaxy, designated IC 10, that weighs in between 24 and 33 times the mass of the Sun.

The black hole made itself known through X-ray emission as it swallows material from the large, hot star it orbits. Data from NASA's Chandra X-ray Observatory and Swift satellite revealed that the black hole and star pass in front of each other as they revolve. By timing the "eclipses" of the X-ray binary, the research team was able to estimate the black hole's mass. Observations in visible light should be able to refine the size further.

For more details, see the CfA press release, or read the scientific paper in the November 1st issue of Astrophysical Journal Letters.