Way back in 1980, Cornell astronomer Carl Sagan and public television's KCET in Los Angeles teamed up to produce 13 hours of prime-time programming about astronomy. They called the series Cosmos: A Personal Voyage, though it's known universally as simply Cosmos. 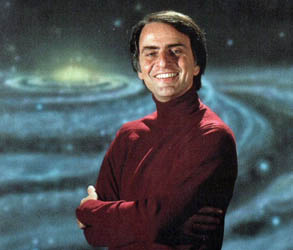 Astronomer Carl Sagan, as seen in a publicity photograph for the Cosmos series.

It was an audacious undertaking at a time when American audiences were still getting used to cable television and seeing Nova each week. Sagan had been disappointed with news coverage of the historic Viking landings on Mars in 1976, and he finally found backing for doing things his way. The tightly-scripted production, still viewable on Hulu and YouTube, strove (in Sagan's words) to be "engrossing and captivating to a broad, general audience, while simultaneously portraying science accurately and even conveying something of what makes it tick."

With an $6 million budget for filming on 100 locations around the world and an arsenal of state-of-the-art special effects, he largely succeeded. Cosmos was a huge hit: it's been seen by an estimated 700 million viewers worldwide, making it the Public Broadcast System's most successful show of all time.

By then Sagan had become an icon, more celebrity than scientist in the minds of many. But he had a captivating style that helped him propel astronomy to new levels of "cool." He later married Ann Druyan, the show's co-writer, and together they collaborated on other books and the movie adaptation of Contact. Sagan died in 1996, just 62, after a difficult years-long fight with myelodysplasia. 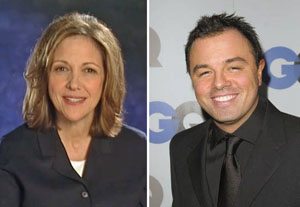 Ann Druyan and Seth MacFarlane have teamed up to create Cosmos: A Space-Time Odyssey, to air in 2013.

Late last week, word came that a new version of Cosmos is in the works. This time it's the vision of Druyan and her Cosmos Studios, and she'll again be aided by astronomer Steven Soter, a key collaborator for the original show.

But what's really raised eyebrows is the choice of Seth MacFarlane as the new series' director. Best known as the creator of the animated sitcoms like Family Guy, MacFarlane doesn't exactly ooze science cred. But he met Druyan a while back, and they appeared together last year on Real Time With Bill Maher. MacFarlane liked Druyan's concept for an updated version, and he helped her sell the concept to executives at Fox. The 13 episodes of Cosmos: A Space-Time Odyssey will debut in 2013.

This new journey across space and time will be hosted by astrophysicist Neil deGrasse Tyson. He's the obvious choice, at least for American audiences. Tyson is an increasingly well-known popularizer of all things astronomical. He directs the Hayden Planetarium in New York City, hosts the PBS series Nova Science Now, and even has a weekly radio show about space called "Star Talk." 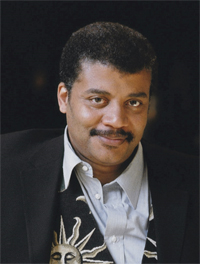 Astrophysicist and science-popularizer Neil deGrasse Tyson has been tapped to host the new Cosmos series.

Tyson first met Sagan while considering whether to go to Cornell as an undergraduate. Surprisingly, Sagan gave the wide-eyed teenager a personal tour of his lab. It didn't work — Tyson went to Harvard — but to this day he feels an obligation to carry on Sagan's legacy of educating the public about astronomy.

All that said, the television landscape is light-years from where it was 30 years ago. Series like the History Channel's The Universe, now in its fifth season, and BBC's Wonders of the Universe (starring upstart British particle physicist Brian Cox) will give the retooled Cosmos plenty of competition.

Druyan and MacFarlane promise to "take viewers to other worlds and travel across the universe for a vision of the cosmos on the grandest scale," presenting scientific concepts with "stunning clarity, uniting skepticism and wonder, and weaving rigorous science with the emotional and spiritual into a transcendent experience."

That's a tall order in this whiz-bang age of seconds-long sound bites and fleeting attention spans. Let's hope they succeed!

Love the original Cosmos and Tyson will be perfect.

In college at the time, I was enthralled with Sagan's Cosmos. I can't imagine a reboot being much better even with Druyan at the helm and modern computer-generated special effects. We have much more complete science data and imagery now, but the real value of Sagan's version was the historical background and tie-ins with human nature and the human spirit. One of Sagan's main messages was that we could all too easily destroy ourselves if we didn't get a handle on the more animalistic aspects of our nature, yet he held out an optimistic hope for our collective future.

"We are a young species, and full of promise" --Carl Sagan

The new series could feature brief clips of Carl Sagan from the original, both to show how astronomy has progressed in 30 years as well as to bring Sagan's inspiring perspective to a new generation. At the very least, they have to show him saying "billions and billions."

Some time around the turn of the last century I was a post-doc observing on the 200-inch at Palomar when Tyson happened to be visiting. During dinner at the observatory that night we sat around talking about when the next Carl Sagan would come along. Looks like the time is now.

Astronomy has always stirred me on the deepest level, and Sagan was one of the most fundamental reasons I became interested in the subject growing up. His profound wisdom and knowledge were so captivating. I am delighted to know Druyan and Tyson will be on the project. As low brow as much of MacFarlane's work is, he actually is a very intelligent person in my opinion, and worthy of respect also.

My concern is the new series getting diluted by our sensationalistic, fast paced society. Other modern series like History's The Universe suffer from this. I hope that this series is a deep, thought provoking journey just as the original was, and not fodder for the masses. I don't mean to sound arrogant, and I plan to keep an open mind. I simply want people of this generation to experience the wonder of the cosmos just the way I did.

Sorry, NdT is no Carl Sagan. And the prospect of Fox airing it has me wondering if this iteration will list decidedly to the starboard side; how will an episode like "Blues for a Green Planet" be conveyed under the Fox mantle? And Seth MacFarlane??? Seth Parker would seem to make more sense. Certainly the leaps in knowledge since 1980 call for big-stage dissemination, but not this way. Let the spirit of the original "Cosmos" stay unsullied.

I was disappointed with the original version of Cosmos. Sagan had a tremendous opportunity to say something about light pollution, but, zip, nada. I'll feel the same way about the new version if that happens again. It's not just about the lose of the night sky, it's about throwing away billions of energy dollars because of inefficent, poorly designed, outdoor lighting. Do an online search for "The Irresponsible Use of Outdoor Lighting".

Carl was, and is, my inspiration for the public observatory project I have been working on for years now. I have even dedicated it in his honor.
I find it rather interesting how he died. He was very much against nuclear power plants and often protested them at location, at least as I understand things. He was soon thereafter treated at the U of W medical cancer unit which is, I believe, where he died. I am from Seattle, and this all hit me rather hard back then.
I looked up the disease and asked the question.
I am wondering if he had some pre-existing condition. If not,this whole discussion could go south really fast.
And, no, I have had to come to the conclusion that I can not, in good faith, trust our government.
I pray that I am totally off base and should just close my *%$!* mouth!

No gushing about time-travel, please. Granted, worm holes sell, but if you want to travel to the past, you can do that when you get to heaven. There, a record of everything that ever happened is kept. No paradox; you can revisit the past without effecting it. If you want to travel to the future, reincarnate when your time arrives, or consult a visionary if it's just idle curiosity. I know, I know: that's not science. That's the point. Neither are worm holes!

Dr. Sagan was a Renaissance man, with passion and perspective for his subject. If we get some of that in this new series, that would be great, but we'll get the best result if the makers follow their OWN personal views.

By the way, I believe in one of his books Dr. Sagan said that he never used the phrase "billions and billions"; he emphasized the "b", as in BILLions, to distinguish it from millions.

I hope they keep the original soundtrack.

Personally, having watch the quality of NOVA deteriorate remarkably over the last several years, I cannot help but be skeptical. That goes double with Neil deGrasse Tyson hosting it: I have seen NOVA Science Now as something that could easily be renamed "Science for Dummies".

I know that you cannot make a show like this so scientifically exact and detailed that only a scientist could understand or appreciate it. However, the temptation in recent years has been to try to make science accessible and understandable to everyone, and that will not do either. If you dumb it down to where a second grader or anyone not really interested in science can understand it, then it will tell those of us who already know some science if not leave us aghast at the misconceptions that such treatments often create.

I hope that this is something this is in depth enough to teach most of us something new at times, while also being careful to make it so that a somewhat smart high school student with a genuine interest in science can follow and appreciate it. It also needs to be visually entertaining so that a young kid who may not be able to really follow it can still marvel at it and at the parts that they can grasp.

In short, I hope that this series ends up being a mind challenging exploration, and not a mind numbing glossing over.