The Star That Changed Our Universe

Of all the distant stars ever glimpsed by a telescope, which one is most famous? There's certainly no shortage of candidates. Some might argue that it's the discovery that Mizar, in the Big Dipper's handle, is a double star (a revelation that Galileo might have noted in 1617). Or perhaps it's Supernova 1987A, the first nearby star to self-destruct in modern times. 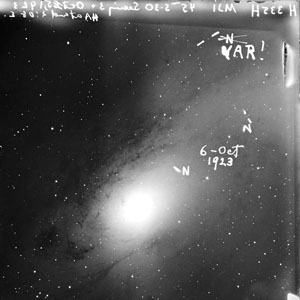 A copy of Edwin Hubble's 4-by-5-inch glass plate of M31, which he took with the 100-inch telescope on Mount Wilson. He marked three stars N, thinking they were novae — but later realized that one was a Cepheid variable. Click on the image for a larger view.

But astronomy historians will invariably point to a 19th-magnitude star in the "Andromeda Nebula," M31. No less an observer than Edwin Hubble himself first spied the star on a 45-minute-long exposure he'd taken early on October 6, 1923, with Mount Wilson's 100-inch Hooker Telescope.

Hubble had spent months trying to determine the distance to M31, to see if it (and other such controversial "spiral nebulae") were distant parts of the Milky Way or instead distinct island universes. Initially he'd marked three stars on the plate with N, thinking they were novae. But when he compared his plate to earlier exposures, he realized one of those three was actually a variable. So he crossed out N and excitedly penned VAR! next to it.

The great astronomer immediately realized the import of his find: it was a Cepheid variable, a stars whose rhythmic weeks-long pulsations are tightly tied to its intrinsic brightness. Knowing the star's true brightness, Hubble quickly calculated that M31 must lie an incredible 1 million light-years from Earth — far too distant to be part of the Milky Way. (Modern measurements peg M31's distance at about 2½ million light-years, but Hubble was definitely in the ballpark.)

Virtually overnight, our entire perception of the universe changed. David Soderblom (Space Telescope Science Institute) argues that this star, now known as Hubble Variable Number 1 or simply V1, ranks as the "single most important object in the history of cosmology."

Fast-forward 87 years: Prompted by astronomer-astronaut John Grunsfeld, astronomers decided to use the namesake Hubble Space Telescope to reobserve this game-changing star. First, however, since no modern observations of the star were known, Arne Henden (director of the AAVSO) led a team of amateur astronomers who tracked the star from July to December last year. "Today a 20-minute exposure with a 14-inch telescope can duplicate what Hubble did with the 100-inch in 1923," Henden notes.

This animation reveals the variable star in the Andromeda Galaxy discovered by Edwin Hubble in 1923. Astronomers took the four-image sequence in December 2010 and January 2011 with the Hubble Space Telescope's Wide Field Camera 3.

The amateur observations refined the star's period to 31.415 days, which gave HST's handlers the timing they needed to catch the star at its brightest and dimmest. According to Lisa Frattare, a member of STScI's Hubble Heritage team, the orbiting observatory recorded V1 four times last December and January. Although the observations turned up nothing new, Frattare explains, "It's a worthy thing to have done this."

You can read more HST's walk down memory lane — and about how copies of Hubble's famous plate took commemorative rides on two of Space Shuttle missions — in this extended press release.

Thanks for this story, Kelly. I enjoy learning about the history of our understanding of the universe. It's humbling to realize how recently we humans have discovered such basic facts as the existence of other galaxies. And it's inspiring to learn how these discoveries were made, using much less sophisticated technology than we have today, but with remarkable intelligence and awesome dedication. We truly stand on the shoulders of giants. The Hubble Space Telescope revisiting Hubble's Variable Star in Andromeda closes a very satisfying circle. Fits nicely with Neptune completing one orbit since discovery.