I've just returned from a weekend in Springfield, Vermont. This gritty, past-its-prime town doesn't have much in the way of tourist attractions, unless you count the state prison built there a decade ago or the giant doughnut erected for the 2007 premiere of The Simpsons Movie.

The famously pink clubhouse atop Stellafane's Breezy Hill in Springfield, Vermont, was built in 1924.

Instead, I was there for Stellafane, the granddaddy of all star parties and one the largest such gatherings on the planet. Nearly 1,000 kindred cosmic spirits had gathered to escape the pall of city lights and to steep themselves in darkness for a few precious nights.

Hosted by the Springfield Telescope Makers, Stellafane means "shrine to the stars." Springfield is where the art of telescope making got its start in August 1920, when 15 men and one woman signed up to learn how to grind their own mirrors from legendary jack-of-all-trades Russell W. Porter.

By 1924 the men had built a clubhouse atop a high point known locally as Breezy Hill, and there they convened the first Stellafane two years later. Backyard astronomers have flocked to that hallowed ground each summer ever since. 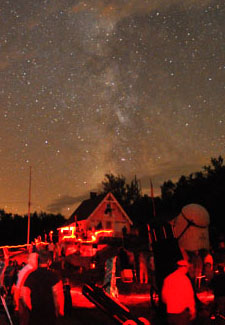 The Milky Way towers over Stellafane's clubhouse. Click on the image for a larger view.

The big draw, as always, is a chance to see the night sky with little intrusion by light pollution. And unlike the sopping torrents I'd endured in past years, Stellafane 2009 enjoyed a four-night run of clear weather that will be the talk of gatherings for years to come. Dense with stars, the Milky Way's luminous band arched from horizon to horizon. Even the small telescopes around me were revealing its celestial gems — here a luminous bubble of interstellar gas, there a tight little cluster of distant Suns.

Friday night was luxuriously dark. I waded into a field full of telescopes, walking almost instinctively in the darkness and flicking on my trusty red flashlight only occasionally. Like a kid in the cosmic candy store, I was having a hard time deciding what to look at next. Someone nearby was showing off the Ring Nebula. I tiptoed over for a quick peek, and light from the remains of a dying star that had raced across the void for thousands of years rushed headlong into my eager eye. 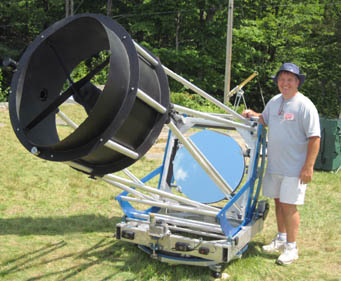 Steve Pellarin of Lasalle, Ontario, poses with the 28-inch f/3.6 reflector he displayed and used at the 2009 Stellafane Convention.

Much like their owners, the telescopes around me came in all shapes and sizes — from simple store-bought tubes to monsters that towered like circus cannons. I needed a ladder to reach the eyepiece of Steve Pellarin's truss-tube behemoth, which boasts a 28-inch f/3.6 mirror (or, as Steve pointedly notes, "f/3.614").

The next morning, groggy from too little sleep, I walked the site's expansive grounds. Here, in one sweeping vista, were the past, present, and future of backyard stargazing in general . . . and of amateur telescope making in particular. It's no secret that members of astronomy clubs are getting grayer over time. The youthful ebullience and drive that propelled organized amateur astronomy during its heyday in the '60s and '70s have waned. Club officers everywhere are desperate to attract new, younger members. 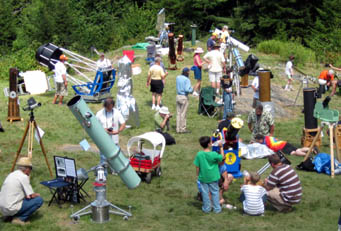 Stargazers and their telescopes gather atop Breezy Hill during the 2009 Stellafane Convention in Springfield, Vermont.

Few venues celebrate the past glories of amateur astronomy the way Stellafane does. We challenged each other to learn who'd been coming the longest. Andrew Simoni beat everyone else hands down — he'd first come in 1938! S&T's Dennis di Cicco, a long-time Stellafane organizer, is still kicking himself for being absent last year for the first time since 1967. (He had a good excuse, though: a total solar eclipse that he viewed from China.)

Saturday morning's "swap tables" groaned under salvaged telescope optics, hefty chunks of cast-iron hardware, and obsolete electronic gadgetry. Books on astronomy that were probably read voraciously by enthusiasts a generation ago sat in musty stacks here and there. Much of this stuff had little more than sentimental value to those picking through the piles. Some of it, still unsold by day's end, might end up buried beneath the grassy fields rather than hauled back home. 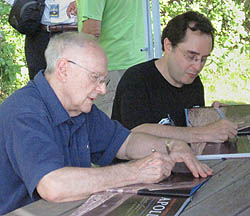 This year's gathering was particularly thick with nostalgia. To celebrate the 400th anniversary of telescopic astronomy and the 40th anniversary of the Apollo landings, Stellafane's organizers had pulled many strings to bring ex-moonwalker and accomplished artist Alan Bean to provide the keynote address. Now 77 and still remarkably sharp, Bean was gracious and accommodating to all the attendees eager to meet him and hear his recollections of Apollo 12's journey to the Ocean of Storms in November 1969.

As for the present: modern observing often embodies computer-designed optics, computer-driven mounts, and computer-controlled imaging. (You should have seen all the displays glowing in the darkness!) Fortunately, Stellafane still celebrates the ingenuity of weekend tinkerers, who bring their creations to Breezy Hill to compete in the event's telescope-making contest. There's no prize money involved — only the satisfaction of being recognized by your peers for a job well done.

And what of the future? Will there be Stellafanes — and legions of amateur astronomers to attend them — for generations to come? I encountered far more young people, even teenagers, tromping around the grounds than I expected to see. Quite a few were there with their dark-sky-loving parents, so it's hard to judge how many truly have stargazing in their blood. Even if they do, I'll wager that the electronic social networking so ubiquitous among young adults could someday spell the end of many astronomy clubs as we currently know them.

Light pollution could be a death knell for backyard skywatching too. I briefly addressed the attendees Friday night to provide an update on outdoor-lighting efforts around New England. At one point I asked to see how many in the audience of 200 were members of the International Dark-Sky Association. Only a few hands went up, and I winced. No one stands to gain more from controlling light pollution than the devotees seated in front of me — yet few of them are supporting the IDA's amazing and effective work. 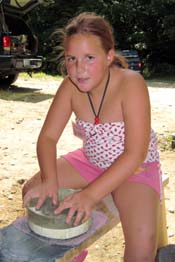 Kayla Thibodeau, 10, demonstrates how to grind the mirror blank for an 8-inch-aperture telescope.

Just when you start to convince yourself that telescope making is a dying art, you run into someone like 10-year-old Kayla Thibodeau. I encountered her inside Stellafane's gleaming new Flanders Pavilion, where she methodically rubbed an 8-inch glass disk against a plaster-and-tile "tool." Give her enough hours, and she'll have shaped the glass's surface into the precise concave depression needed for a reflecting telescope's primary mirror.

Kayla bubbled with enthusiasm as she demonstrated her mirror-grinding skills. She told me she'd worked all summer on a 6-inch mirror at home that was nearly complete, needing only final figuring and aluminizing to be starlight ready. To join the Springfield Telescope Makers, she explained, you have to make a telescope mirror or lens on your own. "When I'm done," she promised me, "I'll be the youngest member."

So there's hope after all. You can bet that next year I'll drive 100 miles just to stand atop Breezy Hill, waiting for the cosmos to envelop me — and to take a peek through Kayla's telescope.

Nice article Mr. Beatty.
Unfortunately, when I am able to attend one of my club's meetings, the Astronomical Society of Kansas City, I too, see mostly graying heads in the room. And this is a club that is very active in outreach to the general public and schools.

Fortunately, membership in the IDA has increased quite a bit in the last five or ten years, but it is astounding how many amateur(and professional?) astronomers are NOT supporting members. I wish I knew what would convince them this is in their best interest and that it's worth the investment. Perhaps S&T, other popular astronomy magazines, astronomy clubs, etc. should include an IDA membership application/renewal with their renewal notices. IDA should be happy to support that effort and make it cost effective.

Nice article Mr. Beatty.
Unfortunately, when I am able to attend one of my club's meetings, the Astronomical Society of Kansas City, I too, see mostly graying heads in the room. And this is a club that is very active in outreach to the general public and schools.

Fortunately, membership in the IDA has increased quite a bit in the last five or ten years, but it is astounding how many amateur(and professional?) astronomers are NOT supporting members. I wish I knew what would convince them this is in their best interest and that it's worth the investment. Perhaps S&T, other popular astronomy magazines, astronomy clubs, etc. should include an IDA membership application/renewal with their renewal notices. IDA should be happy to support that effort and make it cost effective.

Hi! I like the efforts of my fellow stargazers on the othe side of the Atlantic. I am from Holland, and I am a member of Dutch observatory ("Sterrenwacht") Het Vechtdal (http://sterrenwachthetvechtdal.nl). I love the way you guys organize to take a peek at the sky! I am the youngest member of our observatory (though 32 years old), and I keep the website uptodate. At our last public evening, 40 people joined to see the stars! I have hope that stargazing in Holland will be lifting 🙂

As you may know, Holland is one of the most light-polluted countries in the world. Is there a Dutch member of the dark sky association we can join?

I'd be surprised if there wasn't.
Go to http://www.darksky.org/ to get in touch with the International Dark Sky Association. They would love to hear from you.

Thanks for the very nice description of a very fine, and dry gathering this year. Even the moon was no big problem since it gave us all an excuse to catch a little sleep. I think you are right that the average age in astronomy clubs is advancing, but I've always been impressed by the youngsters at public star viewings and especially at Stellafane. Itâs heartening to see how many kids come, and most seem to be having a very fine time indeed. Their enthusiasm and knowledge of the sky is wonderful to see, even teenagers I met on one of the solar system walks seemed viscerally impressed with the vast distances between planets as we walked from the Sun to Neptune, scaled to a 12 inch Sun. And not nearly as tired at the end as me. Virtual social networking is a draw, but I think to extend ties built under the starry, Perseid laced skies of Breezy Hill and at the many other fine gatherings worldwide. Email, Facebook and Twitter connects people who are close in spirit when far apart, but once you have climbed that big hill with someone, and viewed the awesome expanse of our galaxy together, well, you just have to keep lugging your collective molecules back to Springfield each year. This year was so fine, I think we might have created a whole new crop of Stellafane addicts. 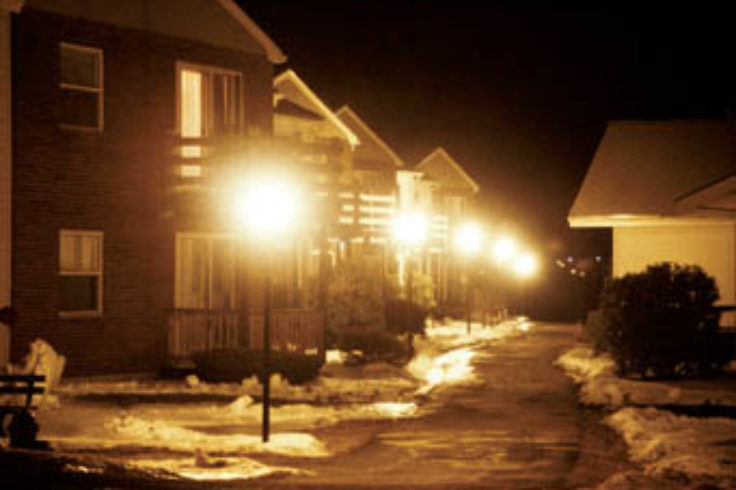 Light Pollution in the Spotlight