For decades solar physicists have wrestled with why the Sun's atmosphere (the corona) has a temperature of millions of degrees, when the solar surface below it is merely thousands of degrees hot. 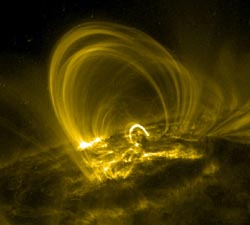 A solar flare in September 2005, recorded by the TRACE spacecraft, sends a magnetized loop of superheated gas arching high into the Sun's atmosphere.

They thought they had the answer when, in 1942, Swedish physicist Hannes Alfvén predicted the existence of waves that could pump energy into the corona as they propagated upward from the photosphere. But no one had been able to observe these Alfvén waves because instrument technology wasn't up to snuff yet.

Now a team headed by Steven Tomcyzk of NCAR's High Altitude Observatory has managed to record and measure the elusive waves. The researchers (including a high-school science teacher from Massachusetts) used a new instrument that rapidly maps brightness and polarization over a large swath of corona in near-infrared light. They made the observations two years ago; it's taken them this long to puzzle it all out.

As Tomcyzk's team reports in the August 31st issue of Science, the waves propagate upward into the corona along magnetic field lines at speeds of roughly 1,000 miles per second, about 10 times faster than the speed of sound there. (That's not the velocity of the superheated gas but rather of the waves themselves — think of the fast-moving ripple created when you flick the end of a taut rope.)

The bad news is that the Alfvén waves aren't nearly powerful enough to fuel the corona's incredible heat. Something at least 10,000 times more energetic is needed. The good news, however, is that scientists now have a powerful new technique to probe the solar corona. It turns out that the waves' propagation speed depends directly on the strength of the magnetic field around them. So the new instrument's images, when combined with other measurements of solar vibrations (helioseismology), can be used to estimate the intensity and orientation of the coronal magnetic field.