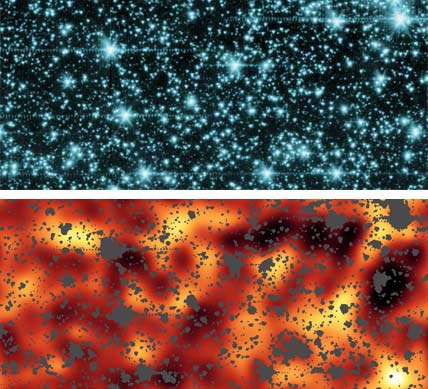 Top: This image shows what the Spitzer Space Telescope saw in a nondescript 12-arcminute-wide slice of celestial real estate in Draco. Bottom: After subtracting stars, galaxies, and other foreground objects, scientists discerned a subtle pattern of clumpy leftover light — light that may have come from the very first stars.

It's a Holy Grail of modern astronomy — seeing light from the very first stars. Last week, four astronomers said they sifted such light from images taken by NASA's Spitzer Space Telescope. But team leader Alexander Kashlinsky (Science Systems and Applications Inc.) admits that the evidence is "kind of circumstantial," and some scientists find it suspect.

What lies behind the lively debates that the group's just-published paper has sparked among astronomers worldwide? 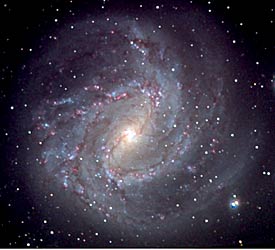 Working backward from the relatively young stars in our own galactic backyard, astronomers have defined three stellar populations. So-called Population I stars formed within the last few billion years. Population II stars formed perhaps 10 billion years ago, when galaxies were young. Population III stars formed earlier still, out of the cooling gas left over from the Big Bang. On a clear November evening, a pair of binoculars can easily show you Pop I stars (check out the Pleiades) and Pop II ones (spy the egg-shaped bulge of the Andromeda Galaxy). But Pop III stars have been the stuff of conjecture even for professional astronomers using the world's most powerful telescopes.

Theorists expect Pop III stars to be massive and hot, and thus to shine mostly in ultraviolet light. However, that light would get stretched, or redshifted, while traversing an expanding universe — turning it into the infrared light that Spitzer can see.

Unfortunately, nearly everything that lies between us and the edge of the visible universe, from dust particles in our solar system to the farthest galaxies, also emits infrared light. Kashlinsky and his colleagues dealt with this problem in several steps. First, they subtracted recognizable stars and galaxies from their 10-hour exposure of a nondescript patch of the constellation Draco (see the upper panel in the image at the very top of this story). Next, they subtracted whatever infrared light they could attribute to dust clouds in our solar system and in the Milky Way. They even subtracted the light that they expect from galaxies that Spitzer couldn't resolve individually. 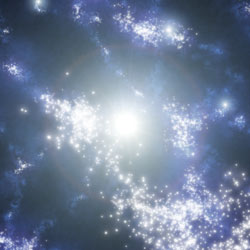 Theorists expect that the universe's first stars would be many times more massive and luminous than our Sun and that they would burn blue-hot, giving off copious ultraviolet light.

Finally, they looked for patterns within the remaining light and found that it speckled the sky in places while leaving others dark (see the bottom half at the very top). And that's precisely what one would expect of the first stars, says coauthor John Mather (NASA / Goddard Space Flight Center). Because the hydrogen and helium atoms within these stars would first pool in the early universe's densest zones, says he, "the very densest regions will light up first." Furthermore, adds Kashlinsky, those first-to-shine regions will tend to appear in bunches, like peaks in a mountain range. "That's why we believe that this light has come from the first stars."

In last week's edition of Nature, Kashlinsky and his colleagues detail numerous tests that they performed to convince one another that they properly subtracted known "foreground" sources of infrared light. They also worked to convince skeptics that they had a handle on Spitzer's optics. Instrument specialist Michael Pahre (Harvard-Smithsonian Center for Astrophysics) notes that "the authors are highly knowledgeable" about Spitzer's IRAC camera, which took the now-controversial image. But UCLA cosmologist Edward Wright is dubious. "The fluctuations from Pop III objects would almost certainly not follow the [pattern] shown here," he states, but they could have resulted from improperly compensating for point-to-point differences in telescope sensitivity or from improperly removing the spiky, diffuse halos that Spitzer creates around individual stars. 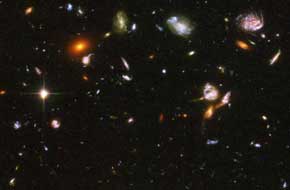 Some of the faintest galaxies visible in the Hubble Ultra Deep Field may have formed when the universe was just a few hundred million years ago — and yet the first stars may have shone even earlier.

Even if the patterned "excess" light that Kashlinsky's team has found is not an instrumental artefact, that hardly assures skeptics that the light really comes from Pop III stars. "They don't have a smoking-gun signature," says Harvard-Smithsonian theorist Abraham Loeb, who speculates that a population of as-yet-undiscovered dwarf galaxies at intermediate redshifts might be responsible.

Kashlinsky admits that he can't prove that the feeble infrared light comes from suns bereft of heavy chemical elements — a property unique to Population III stars, whose own nuclear furnaces would quickly seed the cosmos with carbon, nitrogen, oxygen, and much of the rest of the periodic table. Doing so would require a spectrum of the mysterious light, and Spitzer, with its 85-centimeter (34-inch) primary mirror, is far too small for the task. "But to explain the signal" that his team found, Kashlinsky asserts, the stars "had to be very massive, much more massive than what we see" around us today.