The World of Astronomy Communicators

A motley group of science journalists, teachers, photographers, and amateur and professional astronomers convened in Warsaw, Poland, to discuss better ways of communicating astronomy with the public.

Does astronomy matter? What percentage of people on this planet care about the wonders of the universe when they appear unrelated to the challenges and entertainments of daily life? Does astronomy “sell” in this age of media saturation, when the night sky has become an invisible part of the urbanite’s environment? 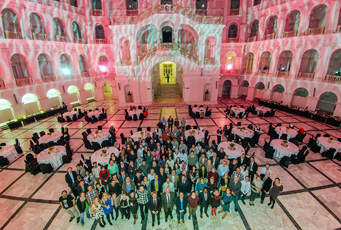 The CAP2013 participants at the mail hall of Warsaw University of Technology. See more photos of the event.

Despite the challenges of modernity, astronomy is still a widely celebrated science, and one of the biggest success stories of public engagement with science and technology. For that, astronomy can thank the growing ranks of science communicators and the outreach and education programs they lead.

As more and more people seek to join this profession, they’re looking for academic routes into careers, as well as international collaborations to bear out projects. To that end, the 4th Communicating Astronomy with the Public conference (CAP2013) in Warsaw, Poland, brought together almost 200 science journalists, photographers, science teachers, and professional and amateur astronomers, collectively hailing from 40 countries. The group spent five days in mid-October sharing local and international science outreach and education experience, revealing the cultural and environmental bridges between astronomy and society, and discussing the challenges of communicating astronomy and space exploration. 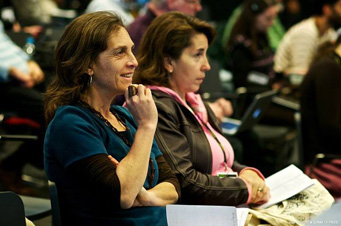 Valeria Foncea, the press officer of the ALMA Observatory in Chile, talked about the connection of elder Atacama people with the night sky.

The head of the European Space Agency’s Research and Scientific Support, Mark McCaughrean (European Space Agency), opened the conference by illustrating some of the challenges for astronomy communicators. At the same time, he said, several future space missions, such as Gaia and New Horizons, will open opportunities to engage the public. Other speakers concerned with nations’ limited science budgets talked about how to communicate astronomy with politicians in order to increase the level of national support.

The following days featured a broad range of talks on outreach and education efforts, from teacher training programs to international online citizen science projects, such as Zooniverse and CosmoQuest. Presentations discussed fabulous local efforts to popularize astronomy in Ghana, the islands of the Philippines, the remote villages of Malaysia, even including a dark sky project in the light haven Hong Kong. Still other presentations went international, such as the Astronomers Without Borders talk on their Global Astronomy Month. I also led an informal “unconference” session titled “Astronomy Beyond Science,” which turned into an engaging discussion on the social aspects of astronomy and relates to us through its long existing connection with art, culture, poetry and philosophy. 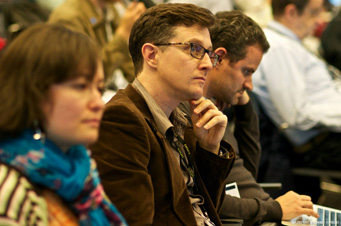 Pedro Russo, the coordinator of the International Year of Astronomy 2009 (IYA2009), who now manages the Universe Awareness international project, talked about evaluation systems for astronomy outreach programs. He argued that programs must go beyond tallying up attendance levels to measure the level of public engagement. This is important regardless of the scale of the program. For example India’s Eyes on ISON program plans to reach 250 million students during the Comet ISON’s apparition, while an award-winning project based in Florence, Italy, engages much smaller groups of children by examining science through storytelling.

Several speakers highlighted the importance of words in science communication. Here Carl Sagan’s legacy was evident, even two decades after his passing; his sense of poetry was incorporated throughout the conference. Another speaker, astronomer Michael West (Maria Mitchell Observatory) analyzed the use of astronomical terms throughout history, gleaning lessons about using the right words for the right audience. 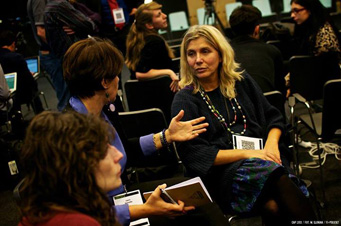 The "unconference" discussions during the CAP2013 meeting raised several new topics that might turn into working groups in the future.

The conference was also a source of brainstorming for the International Year of Light, planned for 2015. CAP attendees discussed the legacy of the 2009 International Year of Astronomy, widely considered the most rewarding of all of UNESCO’s International Year programs. The past success serves as inspiration for the 2015 program, which will encompass light in all its forms, from its role in physics and astronomy to the part it plays in art and culture.

The CAP2013 conference was the largest since the first official meeting in 2005, and was hosted at two excellent venues, the Copernicus Science Centre & Planetarium and Warsaw University of Technology, including sessions inside the full-dome planetarium. The conference took advantage of its location to highlight the level of astronomy outreach in Poland. The Copernicus center itself is one of the most successful science centers in Europe, and a conference side trip took participants to Torun, the birth place of Copernicus. Today, Torun is the beating heart of astronomy education in Poland and hosts Astrobase, a growing network of remote-controlled observatories operating in the region.

The conference was organized by Commission 55 of the International Astronomical Union (IAU), Communicating Astronomy with the Public. While IAU membership is limited to professional astronomers, accomplished science communicators who do not hold a Ph.D. in astronomy can join Commission 55 as IAU associate members. The head of the European Southern Observatory (ESO) education and public outreach department, Lars Lindberg Christensen, leads Commission 55 and Richard Tresch Fienberg (AAS and S&T’s former editor in chief) is currently its secretary. A 2002 conference in Tenerife was perhaps the beginning of these major international meetings for astronomy communicators, and the first Communicating Astronomy to the Public conference was held at the US National Academy of Sciences in 2003. The official series of CAP conferences began in 2005 in Munich, followed by 2007 in Athens, 2010 in Cape Town, and 2011 in Beijing. The commission is currently accepting proposals for hosting the next CAP, to be held in 2016; current possible candidates are Columbia and Canada.

Babak A. Tafreshi is a freelance photographer, science journalist, and astronomy communicator. He is founder of The World at Night (TWAN) and a contributing photographer for Sky & Telescope, European Southern Observatory, and National Geographic.

Thanks Mr. Tafreshi for this interesting and encouraging report. My own experience tells me that many people are very interested in the sky and the larger universe. Just last night, for Hallowe'en I set up my little telescope on the sidewalk in front of my home in San Francisco and pointed it at Albireo, offering trick-or-treating children and their parents and reveling teens and young adults (as well as a few older people) a look. Many people were surprised that you can see any stars in the city, but when I pointed out Albireo with my laser pointer and showed the outline of Cygnus, they were able to see it. In my experience most people's level of understanding of the sky is dismally poor. People are unfamiliar with the most self-evident facts like the motions of the Sun, Moon, planets, and stars through the sky, because so many of us have never developed the habit of looking up at the sky and thinking about what we see. Amateur astronomers play a crucial role in giving people a meaningful direct experience of the sky along with a framework for understanding what we see. I'm grateful to organizations like NASA, the Astronomical Society of the Pacific, Astronomers Without Borders, and our local universities that actively educate and support the amateur astronomy community and our allies in education and the parks. (I wish S&T's comments supported paragraph breaks! There are four paragraphs in this comment, but it just looks like a run-on ramble!)