The Year of Astronomy Begins

Martin Rees, Astronomer Royal of the United Kingdom, addresses the audience at the opening ceremonies of the International Year of Astronomy at USNESCO headquarters in Paris.

Excitement for the International Year of Astronomy 2009 (IYA2009) is building as national opening events take place around the world. The star-studded opening event for the global effort was held at the world headquarters for the United Nations Educational, Scientific and Cultural Organization (UNESCO) in Paris on January 15–16, with a diverse group of astronomers, dignitaries, and students from 99 countries in attendance. Although the event was invitation-only it was far from exclusive as 90 invited students from around the globe attended along with artists and other nonscientists interested in the culture and philosophy of astronomy, all rubbing elbows with famous astronomers and Nobel Prize winners. 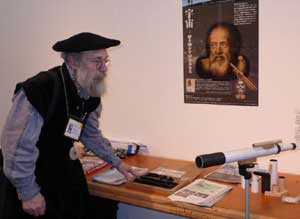 The main hall hosted two days of presentations by luminaries such as Robert Wilson, Nobel Laureate for his codiscovery of the cosmic background radiation, Astronomer Royal Martin Rees, and Jocelyn Bell Burnell, discoverer of pulsars. International Astronomical Union president Catherine Cesarsky described this as an opportunity for students from around the world to hear from the best experts in astronomy. The size of the crowds in the hall indicated that it wasn’t only students who appreciated the unique opportunity.

For some, the action was outside the main hall. Exhibitions from various observatories, space agencies, and commercial entities attracted visitors throughout the event. The Global e-VLBI — an array of radio dishes combined electronically to create an Earth-size interferometer — went beyond the static display with four large monitors showing data coming in and being processed into images throughout the event. 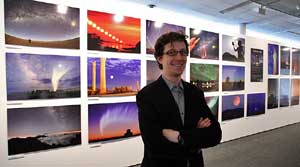 IYA2009 Coordinator Pedro Russo poses before an exhibition of images from IYA2009 Special Project The World at Night.

Exhibitions of art and astronomical images included popular displays of pictures from IYA2009 Cornerstone Project From Earth to the Universe and IYA2009 Special Project The World at Night. The latter shared space with a wall-size permanent installation of art by French master Joan Miro, appropriately enough titled The Wall of the Moon (Miro’s The Wall of the Sun resides elsewhere at UNESCO).

But as always at international gatherings, a main preoccupation of many attendees was meeting new friends and colleagues. The students, many from developing countries where such opportunities are rare, especially relished the chance. The halls looked every bit like a UN venue with the mix of cultures. The receptions held on both nights presented even greater opportunities for mingling. An IAU symposium titled “The Role of Astronomy in Society and Culture” continues during this week, also at UNESCO. 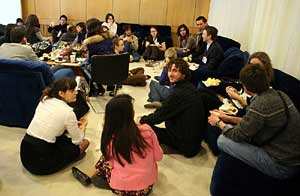 Young astronomers and students from around the world relax between sessions.

The opening event of IYA2009 was more than speeches. The diversity of the participants in age, background, and country of origin made that clear enough. And it was particularly important for those from developing countries. As Cesarsky put it, “They are seeing the same sky as we are and they deserve to see the same discoveries we are and to make some discoveries for themselves in the future.”

That perspective also fits the unprecedented public astronomy outreach now underway with the theme: The Universe, Yours to Discover.

Mike Simmons is co-chair of the 100 Hours of Astronomy Cornerstone Project and president of Astronomers Without Borders.