The acute gaze of the Hubble Space Telescope is revealing the goings on in a cluster full of supermassive stars. 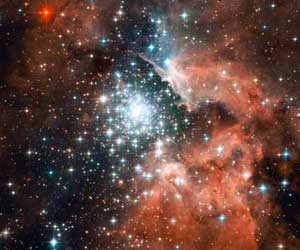 This small version of the Hubble Space Telescope's view of star cluster NGC 3603 doesn't do it justice. Click through to HubbleSite.org for larger versions.

On Tuesday, as the latest image of the continuing Hubble Heritage Project, the Space Telescope Science Institute (STScI) released a view of NGC 3603, a star cluster rich with massive stars and surrounded by residual nebulosity.

The complex is located about 20,000 light-years away in the direction of the constellation Carina. At the seemingly crowded core of the cluster are stars believed to be more than 100 times the mass of the Sun.

The image is a composite of frames taken by Hubble's Advanced Camera for Surveys in December 2005. For more details as well as high-resolution versions of the picture (including an interactive zoomable version) see STScI's HubbleSite.