New observations of a galactic crash site show that there are not just two but three supermassive black holes on the verge of union. Two of them are only 650 light-years apart, the closest pair known.

The butterfly-shaped galaxy NGC 6240 is bursting with stars — and supermassive black holes.

Gas swirling into twin maws lights up in X-rays, exposing the presence of two black holes in images taken by the Chandra X-ray Observatory a couple decades ago. Radio observations, also taken around the turn of the century, confirmed the black holes' existence. Astronomers figured the duo, still 3,000 light-years apart, would finish their cosmic dance in a few hundred million years.

Now, astronomers have learned there’s a third dancer in the mix. New observations using the Multi Unit Spectroscopic Explorer (MUSE) on the European Southern Observatory’s Very Large Telescope in Chile reveal that another black hole has been lurking there unseen all this time.

MUSE is an integral-field spectrograph, which means that when it images a field, it’s also spreading the light collected by each pixel into a spectrum. By looking at a spectral line emitted by ionized hydrogen across the galaxy, Wolfram Kollatschny (Georg-August-University Göttingen, Germany) and colleagues realized that one of the black holes, represented by the more southern spot in X-ray and radio images, is actually two. Their discovery will appear in Astronomy & Astrophysics (preprint available here.)

What’s more, this third black hole is sidling up to one of its dance partners — at only 650 light-years apart, the pair is the closest supermassive black hole duo known. The existence of the third black hole means this cosmic collision may proceed faster than previously thought, in a few million (rather than a few hundred million) years.

By measuring the speeds of stars whirling around each black hole, Kollatschny’s team estimates that the northern black hole has 400 million Suns’ worth of mass; the southern duo has 700 million and 90 million solar masses, respectively. The whole trio is contained within a volume less than 3,000 light-years across.

“Such a concentration of three supermassive black holes has so far never been discovered in the universe,” says coauthor Peter Weilbacher (Leibniz Institute for Astrophysics Potsdam, Germany).

NGC 6240’s fluffy appearance has long been assumed to come from the collision of multiple galaxies, but the existence of a third supermassive black hole in its center suggests it was three galaxies that came together. Light from the galactic collision took 340 million years to travel to Earth so, astronomically speaking, it’s relatively nearby. Kollatschny and colleagues note that there are very few other galactic crashes at this stage of evolution, and theoretical calculations have shown that such multiple mergers should be rare in the present-day universe.

Further investigation of this multiple-merger system will shed light on a process that usually occurs only in the distant universe. 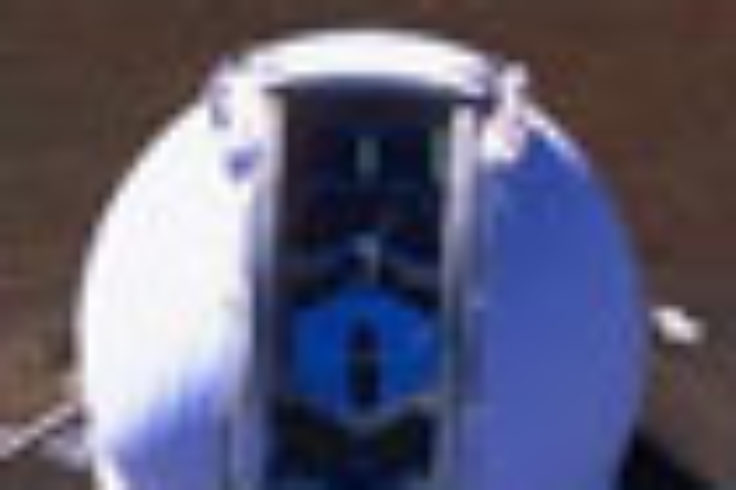 Could a Long-Ago Collision Explain Our Two-Faced Moon?