Earlier today the Royal Swedish Academy of Sciences announced that the 2011 Nobel Prize in Physics has been awarded to astrophysicists Saul Perlmutter, Brian Schmidt, and Adam Riess — a trio of deep-space observers whose competition to spot the most distant supernovae led to the realization that the expansion of our universe is accelerating. 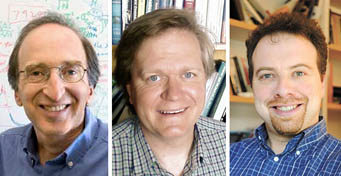 Cosmologists Saul Perlmutter, Brian Schmidt, and Adam Riess (left to right) won the 2011 Nobel Prize in Physics for their discovery of the accelerating expansion of the universe.

All three are American born. Perlmutter is a professor of physics at the University of California, Berkeley, and a senior scientist at Lawrence Berkeley National Laboratory. Schmidt is on the staff of the Australian National University’s Research School of Astronomy and Astrophysics (formerly Mount Stromlo and Siding Spring Observatories). Riess, an astronomer at the Space Telescope Science Institute, is also a professor of physics and astronomy at Johns Hopkins University.

It was 1998 when the Supernova Cosmology Project, led by Perlmutter, and the High-Z Supernova Search team, led by Schmidt and aided by Riess, independently announced a discovery that Science magazine later proclaimed the "Breakthrough of the Year." Both groups had been studying extremely distant supernovae, racing against one other to determine how much the expansion of the universe had slowed since the Big Bang.

Instead, both came to realize that just the opposite was occurring. The distant blasts showed that their outward-racing host galaxies had ever-increasing redshifts (abbreviated z) with distance. Somehow, the universe's expansion rate was accelerating — and had been for several billion years. 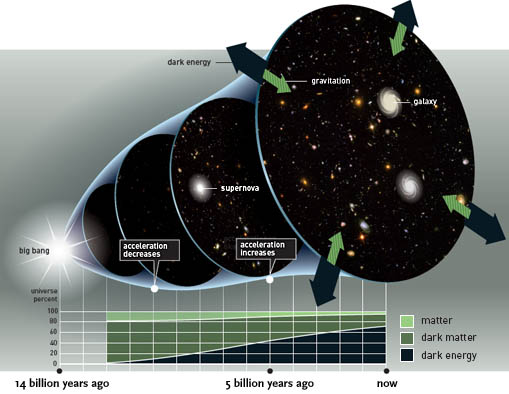 Both teams based their astounding claims on the dependably consistent brilliance of Type Ia supernovae. These incredibly bright "standard candles" permitted the observers to reliably estimate distances to the most far-flung blasts they could see, ones several billion light-years away.

What's speeding up the universe — in effect, creating an expansive force greater than gravity itself — has come to be called dark energy. No one knows the why or how of it yet. In 1917, a year after publishing his general theory of relativity, Albert Einstein famously concocted the "cosmological constant," an anti-gravity fudge factor to keep the seemingly stable universe from collapsing on itself. (A decade later, Edwin Hubble realized that the universe was not static but expanding.) 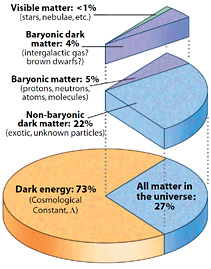 Here's the recipe for our universe, as presently understood. Baryonic matter, the building blocks of atoms and molecules, accounts for less than 5% of all matter and energy. Instead, our universe appears to be dominated by unseen and mysterious dark matter and dark energy.

"If dark energy doesn’t change over time and space, then it behaves like Einstein’s cosmological constant," explains Richard Panek, whose new book, The 4% Universe, explores the supernova race and the revolution is caused. "If it changes over time and space, then it could be quintessence, some kind of dynamical field previously unknown to physics."

"The best thing that ever happened to the two teams — aside from the discovery itself — is the intensity of their rivalry," Panek adds. "They were racing to figure out how much the expansion of the universe was slowing down, but they independently found a result so weird that the community wouldn't have taken it as seriously as it did, and as soon as it did, if the rivalry hadn't been so notorious."

To learn more about the discovery of high-redshift supernovae and current thinking on dark energy, let me recommend Panek's article "Going Over the Dark Side," which appeared in Sky & Telescope's February 2009 issue.

One of these days, someone's going to solve the mystery of dark energy, and yet another Nobel will be awarded in Stockholm. But for now, we can celebrate the cutting-edge observations that forced us to accept its unlikely existence. The mind- and universe-expanding discovery of Perlmutter, Schmidt, and Riess surely ranks among the greatest in the history of astronomy.

By the way, this isn't the first time these three cosmologists have won an award jointly. In 2006, all three received the Shaw Prize in Astronomy to recognize their groundbreaking research. They'll again take the stage together on December 10th during the awarding of the Nobel Prizes.

Has science never oversimplified a problem? That is the gist of the dark energy thesis posted @ http://www.dark-energy.org. The case is made that four parameters, minimum, are required to model the universe gravitationally. Yet the Friedmann solution, without the “cosmological constant,” uses only two…not counting pressure, which is divided by c-squared, and added to density in the equations, making it only a small correction. I invite readers to ponder the suggestion that modeling the universe gravitationally requires a minimum of four parameters, not two, to completely specify a solution.

Thanks Kelly for explaining the significance of this award, the discovery, and the personal history of the researchers. As usual S&T goes several layers deeper than other media, but is still intelligible to this layperson.

Curious you should feel to need to mention where the Nobel laureates were born. Science is nothing if not international. Brian for example is a joint Australian/US citizen, married to an Australian and living in Australia permanently. What does it add to the story to mention place of birth?