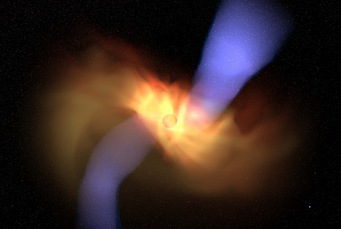 A new simulation shows how a black hole dominates its surroundings.

Black holes are simple creatures. No matter what they gobble down, be it a star, a gas cloud, or the kitchen sink, they can still only be described by two* properties: mass and spin. But these simple creatures live in complex worlds. The matter they feed on creates a complicated “atmosphere” of hot, swirling gas and crackling magnetic fields. A study published in yesterday’s Science shows just how a spinning black hole interacts with its tangled surroundings, and its (totally cool) video is below.

Theorist Jonathan McKinney (Stanford University and University of Maryland) and his colleagues ran a three-dimensional simulation that takes all the complexity of spacetime curvature and magnetic fields into account. With the physics in place, their goal was to watch what happens to a black hole’s neighborhood when the spinning black hole tilts on its side.

In a normal, feeding black hole, the gas and occasional torn-up star that make up a black hole’s diet swirl into a disk before falling into the gaping hole. Two jets fly out at relativistic speeds along the black hole’s poles, created by the interaction between the disk’s magnetic field and the black hole’s spin. The end result looks like a spinning top with a thick central disk; the top’s long handle and spindle represent the relativistic jets.

But what happens when gas suddenly comes from a new source such as a stray gas cloud? From another perspective, it’s as though the spinning black hole suddenly tilts on its side. Does our spinning top come apart, or does the black hole somehow manage to drag the disk and jets back into alignment?