The dense, nitrogen-dominated atmosphere of Titan is laced with multiple layers of organic haze that shroud the surface from view. This false-color view shows the north polar region as it appeared on October 24, 2004.

Of the dozens of outer-planet satellites seen during the historic Voyager missions two decades ago, none left scientists more perplexed than Saturn's Titan. Bigger than Mercury and endowed with a dense, haze-choked atmosphere, this giant moon kept its surface completely hidden from the Voyagers' probing cameras. Although clever infrared imaging using the Hubble Space Telescope and other observatories later revealed a crude patchwork of light and dark surface features, researchers could only speculate about what really lies beneath all that murk.

On October 26th the answers started coming, when NASA's Cassini spacecraft passed 1,174 kilometers (730 miles) from the moon's frigid surface. After the onboard camera had snapped hundreds of images, the spacecraft pivoted so its imaging radar system could cut through the haze and map a 2,000-by-120-km swath of Titanscape. Other instruments recorded surface temperatures, studied the atmosphere, and monitored the electromagnetic environment in Titan's vicinity. 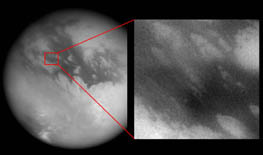 On January 14, 2004, will the Huygens spacecraft land with a thud or a splash? Cassini’s close-up view of the probe’s landing site reveals enigmatic bright streaks that suggest atmospheric movement from upper left to lower right.

By shooting at the near-infrared wavelength of 938 nanometers, Cassini's imaging scientists were rewarded with richly detailed views of the surface — but that doesn't mean they understand what they're seeing. Alfred S. McEwen (University of Arizona) notes that the sharp-edged dark regions often display bright streaks that could be either due to wind or some kind of surface flow. Elsewhere ridges and fractures crisscross the terrain. Some locations have the look of volcanic flows, which, given the moon's 95° Kelvin (–290°F) deep freeze, would most likely have erupted as a warm slush of water and ammonia.

Curiously, there's little evidence for impact craters — a sign that that Titan is geologically quite active, that the surface is deeply buried in billions of years of organic fallout from the atmosphere, or both. "There's an enormous variety of geology going on," notes Jonathan I. Lunine (University of Arizona). But it may take some time to answer basic questions such as whether the dark areas are ethane-propane seas or thick veneers of frozen organic goo. (Liquid methane, once thought likely, is apparently no longer a likely candidate.) Even the highly anticipated radar views are unlikely to offer quick or clear-cut explanations for what lies on the surface. 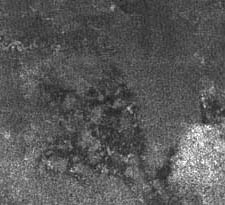 Pulses of radio energy from Cassini’s radar system reflect off Titan’s surface without atmospheric interference. The resulting echoes are recorded by the spacecraft and converted to maps that reveal the radar reflectivity of various regions. Here interconnected dark patches may signify the presence of a lake-and-river system. The image is about 250 km (150 miles) wide.

Fortunately, the Cassini team will have plenty of time to sort things out. Over the next four years Cassini should swoop past Titan 44 more times, most often at a distance of about 950 km. The next occurs on December 13th. Following that, on January 14, 2005, Cassini will pass high over Titan as Huygens, an instrument-laden probe built by the European Space Agency, plunges through Titan's atmosphere and onto its surface.

In time, Lunine says, all the pieces of this enigmatic jigsaw puzzle will fall into place. But it's already amply clear that Saturn's big moon is unique in the solar system. "To us planetary explorers," writes Carolyn C. Porco (Space Science Institute), "Titan is a world apart." 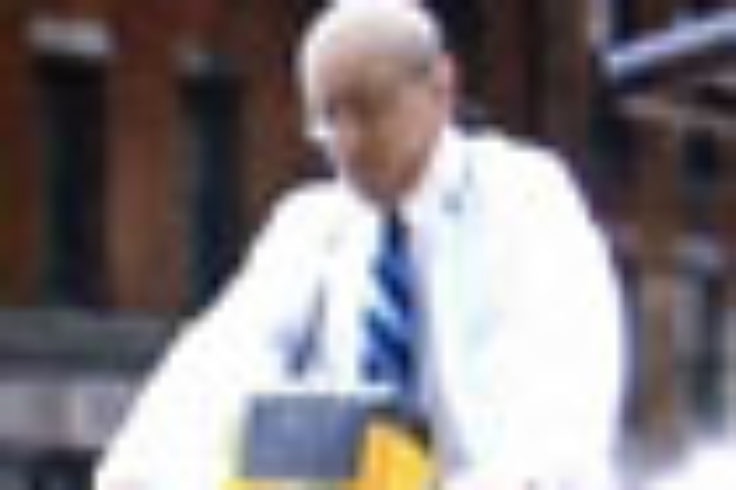