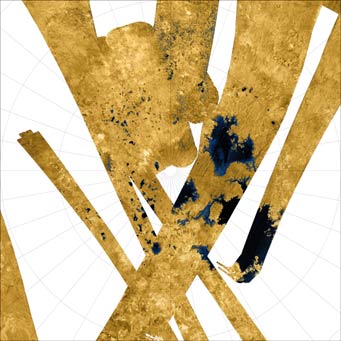 As this composite map shows, astronomers have used Cassini's radar to map some 60 percent of Titan's terrain north of 60° latitude. Some 14 percent of the region is covered in what appear to be lakes of liquefied natural gas. Click for a closeup showing many branched rivers.

This past week, in Orlando, Florida, the folks working on the Cassini mission unveiled their latest maps of Saturn's largest moon, Titan. The spacecraft has been sweeping the cloud-covered satellite with radar every time it can, and thus far astronomers have mapped some 60 percent of the terrain north of 60° latitude at high resolution. This area is casually referred to as the "Lake District," and the skyrocketing property values — in terms of scientists' interest, at least — reflect that.

You see lakes of every size up there — swarms of some 400 tiny ones down to a kilometer across (the resolution limit of Cassini's radar instrument), and big ones including one larger than 100,000 square kilometers (40,000 square miles), larger than Lake Superior. The major ones are fed by dozens of rivers winding down from the surrounding uplands. Many of the rivers have intricate, branched networks of tributaries among the hills.

In this image, the blue- and black-colored regions are the lakes. The big guy is the one at the upper right-center. Click the image to zoom in on it.

But before you go grab your swim trunks remember that these bodies are filled with either liquid ethane or liquid methane (known on Earth as liquefied natural gas), or a mixture of the two. And judging from some of the pictures, not all the lakebeds are completely full just now. Some appear to be completely dry.

Which brings me to a final point. There is a subtlety that's often lost with all these exciting Titan results. Nobody has directly seen liquid on Titan — these spots are what astronomers interpret to be lakes. What's you're seeing are very flat, smooth surfaces that do not scatter radar. There's probably plenty of liquid methane to splash around in, but vacationers (or future Titan missions) might still be in for a rude awakening when they get a closer look.

Check out the Cassini site for much more info and imagery. And once there, check out the cool flyby movie they've created.

Next up: mapping the south pole to see if the terrain is similar to what's up top. 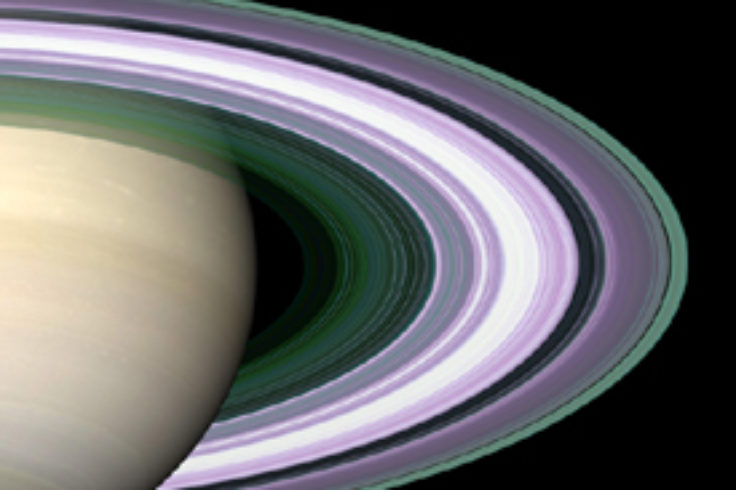