To Catch a Comet

A balloon-borne mission launching from the Southwest will aim a telescope at the approaching Comet ISON.

Comet ISON might wimp out when it comes to public opinion, but that’s not stopping astronomers from studying it. On Sunday, weather permitting, a 2.6-foot (0.8-meter) telescope will launch from Ft. Sumner in the hope of teasing apart the body’s composition. 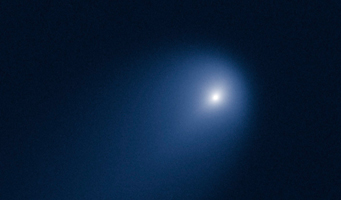 The Hubble Space Telescope took this image of Comet ISON (C/2012 S1) on April 10, 2013, when the comet was about as far away as Jupiter is from the Sun. At the time, the comet's dusty coma (its fuzzy head) was approximately 3,100 miles across, even though the nucleus is only a couple of miles wide. A dust tail extended more than 57,000 miles.


NASA / ESA / J.-Y. Li (PSI) / Hubble Comet ISON Imaging Science Team
NASA’s Balloon Rapid Response for ISON (BRRISON) mission will fly to 120,000 feet altitude using a gigantic helium balloon made of plastic-wrap-like material. That’s still less than halfway to space (regardless of which definition you use), but above about 99.5% of Earth’s atmosphere the view is pretty darn good.

BRRISON will carry two cameras, one for ultraviolet/visible and one for infrared. The infrared one is sensitive to 2.5 to 5 microns, primed for observations of carbon dioxide and water. Astronomers want a good look at the comet’s ratio of these two compounds, because it could tell them how bodies in the Oort Cloud (the far-out territory where ISON hails from) differ from those in the Kuiper Belt. This trip is thought to be ISON’s first into the solar system, so the comet should have pristine material on its surface that’s being vaporized for the first time. Plus, because the comet is whizzing so close to the Sun — it’ll pass about one solar diameter above the photosphere — stuff that normally doesn’t outgas might appear in the coma and tails.

At the wavelengths it’s observing, BRRISON should have a spatial resolution of 1.2 arcseconds per pixel, enough to resolve about 1,100 miles at ISON’s current distance, says principal investigator Andrew Cheng (Johns Hopkins University Applied Physics Lab). The comet’s nucleus is only a couple of miles wide, so we won’t be seeing its craggy surface; it’s the growing aura of volatiles that’s the focus. Still, the comet’s brightness is lower than originally anticipated, and that will affect measurements.

The BRRISON mission carries a 0.8-meter telescope and two cameras, one for ultraviolet/visible work and the other for infrared. The cameras can only work one at a time. Hanging beneath its giant balloon, the payload will look like a tiny speck, even though it dwarfs one of the team members.

ISON isn’t expected to hit peak brightness until late November, but BRRISON doesn’t have the luxury of waiting. One, it can’t look closer than 40° from the Sun — which would eliminate dates after November 12th. But two, the launch crew won’t be around. There’s a sweet spot wind-wise in late summer and early fall, when winds are slowest in the stratosphere over Ft. Sumner. After that, NASA moves its crew to Antarctica to begin the launch season there. And because ISON is primarily a Northern Hemisphere object, the frozen continent is not an option.

The second hurdle is launch time. Balloons launch in the early morning hours when the winds are calmest. ISON will be visible then, but it would be best observed at night, because Earth's thermosphere still stretches overhead at BRRISON’s altitude and adds daytime emission that astronomers have to work around. At the mercy of the winds and weather, the instrument might have to be brought down before its scheduled daylong flight is completed. Given that ISON will set in mid-afternoon and won’t rise again until the wee hours of the morning, the team will need some luck to catch the comet at night.

Despite its name, BRRISON won’t just look at the comet. It has a long list of potential targets, from Jupiter and Comet Encke to Mizar and water-bearing asteroids. BRRISON is very much a pathfinder mission, says team member Eliot Young (Southwest Research Institute). It’s not the first high-resolution balloon mission — Sunrise has produced some of the highest resolution images ever taken of the Sun — although it is the first planetary science balloon mission in roughly 50 years (Stratoscope II last launched 1971).

But there’s hope that the mission will help herald a new era of balloon observations. One of BRRISON’s main goals is to characterize a fine-pointing system designed to compensate for image motion at the tenth-of-an-arcsecond level, Young explains. And while NASA’s longest balloon flights have only circled Antarctica for 50-plus days, new superpressure balloons wouldn’t have to lose and gain altitude with day/night cycles and could conceivably stay up twice as long. If the agency goes ahead with plans for these long-duration missions, a 6.4-ft (2-meter) balloon-borne telescope with a fine-pointing system like BRRISON’s could conceivably provide hundreds of hours of observations that rival the Hubble Space Telescope's in imaging resolution, he says.

As a semi-aside, I geeked out a little when I heard the specs for the balloon. The balloon starts out tall and skinny (150 feet across) at launch, but as it rises, it expands to balance the atmosphere’s falling pressure. At altitude it will be 459 feet across, swollen to a pumpkin shape and banded head to open toe with the seams where the banana-peel-shaped, polyethylene film gores are heat-sealed together. The balloon plus payload at altitude will be 670 feet tall, 20% taller than the Washington Monument.

Then there’s aiming the telescope attached to this plastic monster. Researchers joke that pointing several thousand pounds of suspended payload is akin to stabilizing a Hummer hanging from a 1,000-foot tether. There are a couple ways to handle the problem; BRRISON does it with a frictionless bearing and flywheel that spins to counteract the spinning balloon.

BRRISON is far from being the only observing endeavor for ISON. NASA is spearheading the Comet ISON Observing Campaign, and observatories (both professional and amateur) from around the world are getting involved.

Thanks for this interesting report about a promising and technically challenging mission. I would love to see pictures of the flight! But it puzzles me why NASA and Sky and Telescope continue to use English measures like feet and miles sometimes and the metric system at other times (especially after the failure of the Mars Climate Orbiter). The metric system is used by the global scientific community, and it's much easier to compare one metric quantity to another because everything is in powers of ten. Quick, how many miles in 120,000 feet? How many kilometers in 36,500 meters? See what I mean? At least, if you're going to use English measures, please always include the metric equivalent.

We are the people that built the UVVis Instrument of BRRISON and will be operating it tonight during flight. If you are interested you can check out how we did it from the inside: daystarengineering.wordpress.com

RE metric altitude measures, although the scientific community may use metric measures, the governing bodies of aircraft use feet. So, that's why the mixed metrics, I think. The balloon's altitude is described in the units typically used for aircraft.

Blast, thanks Sam and Frank. Clearly I shouldn't trust my brain!

Thanks John. I'll try to remember that NASA stands for National AERONAUTICS and Space Administration. And, to the team, I'm sorry the equipment didn't work perfectly. It's hard enough to get a telescope to work right when it's firmly mounted on the Earth. I can't imagine trying to use a telescope that's dangling from a balloon!

Bummer on the telescope malfunction, however I want to thank all for trying. I'm still hoping for some decent pictures from the Sep 28-Oct 1 ISON-Mars flyby. Oddly, no one is mentioning this, even Sky & Telescope. What's up? 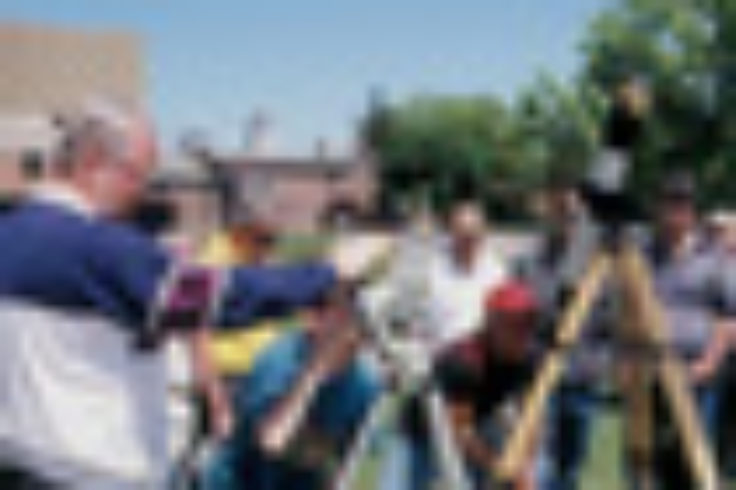