New observations with the powerful ALMA observatory reveal a huge pile-up of dust around a young star. 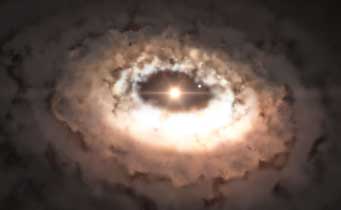 This artistâ€™s illustration shows the dust trap (glowing section) in the system Oph IRS 48. The dust trap provides a safe haven for tiny rocks in the disk, potentially allowing them to clump together and grow to sizes that allow them to survive long-term.

Our understanding of planet formation is limited to snapshots of time. Astronomers never directly observe the entire formation of a single exoplanet system; instead, they combine observations of planetary formation around stars of different ages, glimpsing frozen moments in a process that takes millions of years to happen. Thus, there are significant gaps in our understanding of how planets form. We know that dusty disks form around other stars, and that there are young planets carving holes in some of these disks, but the details behind how little dust balls build up into planets like Earth and Jupiter are something of a mystery.

Now, a new result published in this week’s Science may unravel some of that mystery, giving great insight into one of the thorniest problems in the formation process.

Nienke van der Marel (Leiden University, the Netherlands) and an international team of astronomers used the growing Atacama Large Millimeter/submillimeter Array in Chile to observe the young star Oph IRS 48. This star is about twice as massive as the Sun and only about 15 million years old. (These numbers are rough.) It’s also surrounded by a wide disk of dusty gas, with an inner gap reaching out to about 25 Earth-Sun distances from the star. The team traced the distribution of this material with exquisite precision, creating a high-resolution map of the dusty disk’s radio emission.

The insight came when the team compared observations at three different wavelengths. Each wavelength is sensitive to different sizes of dust grains, meaning that the astronomers can track the behavior of multiple types of material in the disk. At a wavelength of 0.44 mm — where dust the size of a grain of sand emits the most light — the team found a large, almost banana-shaped asymmetry near the disk’s inner edge. The other two wavelengths, which were sensitive to molecular gas and smaller dust particles, did not show this asymmetry. The feature spans nearly one-third of the inner rim of the disk and is more than 100 times brighter than the opposite side.

The ALMA observations are the smoking-gun signature of a process that until now was only theoretical: the so-called "dust trap." The dust trap is a mechanism that herds together larger dust grains, keeping them from spiraling in toward the star. Typically, the smaller particles travel with the molecular gas in orbits around the disks of young stars, but drag forces cause larger particles — the exact size depends on the distance from the star — to lose kinetic energy and spiral in. This process should be relatively fast, but since planets are fairly common, many astronomers have put forth theories to explain how dust hangs around long enough to form planets.

Van der Marel’s team thinks the clump of millimeter-size grains might result from the gravitational influence of a massive planet or brown dwarf orbiting in the disk gap around Oph IRS 48. (The planet would also be responsible for clearing that gap in the gas, which serves to slow down the flow of gas and dust onto the star.) The planet’s presence could create a vortex on the disk’s edge, where the pressure in the hurricane-like system acts as a funnel, keeping dust particles trapped and giving them time to coalesce into planetesimals.

That doesn’t explain how the gap-carving planet formed, though. The authors also think it’s unlikely that, so far from the star, this congregation of dust will form a planet. Instead, they suggest that it might be the predecessor of a system similar to our own Kuiper Belt. And since we know that planets are relatively common, there must be other ways to trap dust, in addition to having a relatively massive body already orbiting the star. Either way, the observations by van der Marel and her team are a big step in understanding this mystery.

There is indeed no way for the astrologist to observe the formation of a planet. Thus, prediction is the best way they can do. Really interesting. Thumbs up!