When Allan Sandage died on November 13th, succumbing to pancreatic cancer at age 84, we lost one of the true giants of observational astronomy.

It's hard to overstate this man's contributions to our understanding of the visible universe. Starting his career literally at Edwin Hubble's side as an observing assistant, Sandage carried on efforts to measure distances to the nearest galaxies and the rate of the universe's expansion after Hubble's untimely death in 1953. 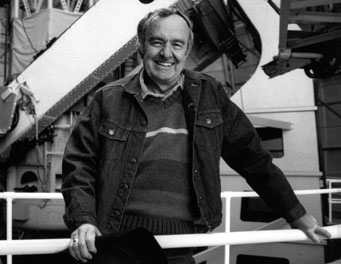 A light moment with Allan R. Sandage (1926-2010), taken during the early 1970s inside the dome of the 100-inch Hooker Telescope at Mount Wilson Observatory.

By exploiting the power of the new 200-inch Hale telescope atop Palomar Mountain, Sandage realized that Hubble had mistaken small star-forming regions in nearby galaxies for individual stars and therefore had miscalculated the galaxies' distances. Other tweaks followed, and in May 1958, Sandage published a drastically revised extragalactic distance scale, shrinking the value of k, relating an object's distance and its recession velocity, from Hubble's value of 530 km/s per megaparsec, to just 75. This meant that the universe was not 1.8 billion years old, as Hubble had surmised, but instead much older — more like 12 billion years.

Sandage later insisted that this critical value, known today as the Hubble constant, H0, was even lower, around 50, and the universe even older. But in hindsight he'd nailed it the first time. Recent observations of the cosmic microwave background, as well as accurate distances to galaxies made with the Hubble Space Telescope and other means, have established that H0 is 71 km/s/mpc to within a few percent.

Interestingly, Sandage didn't really think of himself as a cosmologist. "I'm really much more interested in stellar evolutionary processes," he noted in an oral history recorded in 1978. "I'm an astronomer, [interested in] calibration processes, the determination of absolute magnitudes of certain types of objects, their use in the astronomical context, structure of the Milky Way galaxy and density gradients. Those are the problems that occupy me."

Sandage continued to tackle "those problems" throughout his remarkable career and long after his formal retirement in 1997 from the Carnegie Observatories in Pasadena, California. For example, he coauthored a seminal 1962 paper (with Olin Eggen and Donald Lynden-Bell) that describes how an enormous primordial gas cloud collapsed to form our galaxy. No astronomy library is considered complete without a copy of Sandage's Hubble Atlas of Galaxies, published in 1961.

The hits just kept on coming. With more than 500 publications already to his credit, Sandage coauthored an Astrophysical Journal article on bulk motions in the local supercluster of galaxies that appeared earlier this year and submitted another article on RR Lyrae star in June.

"Allan was one of the greatest observational cosmologists of the 20th century," comments Wendy Freedman, Carnegie Observatories' director. "He was tremendously prolific. His work on cosmology and the ages of the oldest stars in the Milky Way was tremendously influential, and he will be remembered for his decades of contributions to cosmology."

Much of his observational work came before the advent of digital detectors and comfy observing rooms surrounded by control consoles. Instead, he labored in the prime-focus "cage" of the 200-inch telescope, suspended high above the beast. "There is a tremendous advantage, which is not easily stated, of sitting in the dark in the prime-focus cage, close to the instruments," he once recalled. "It gives you a great deal more time to think about the consequences of the data coming in…. The mind is put in a state when it's more receptive to call things up from its deep recesses."

In that sense, Sandage enjoyed a certain kinship with amateur astronomers. Born in 1926, he was the only child in an academic family and got the "astronomy bug" after looking through the backyard telescope of a boyhood friend. (In fact, he once ground a 6-inch mirror but never finished it.) He double-majored in physics and mathematics at the University of Illinois before earning his doctorate at Caltech 1953. By then he'd already been observing with Hubble and on his way to making his indelible mark in astronomy.

For more insight on Sandage, especially his quest to find the Hubble constant, read Richard Panek's excellent 1999 profile for the New York Times.

Thank you for the most succinct, most ACCURATE summary of a truly great astronomer's work I've yet read on the sad news of his passing.

Thank you for the most succinct, most ACCURATE summary of a truly great astronomer's work I've yet read on the sad news of his passing.