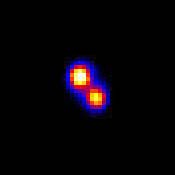 The Trojan asteroid 617 Patroclus is actually two asteroids, as seen in this false-color image taken with the 8.1-meter Gemini North telescope atop Mauna Kea, Hawaii.

The total of known or suspected binary asteroids grew
to 18 on September 22nd when William J. Merline (Southwest Research
Institute) and his colleagues discovered that the Trojan asteroid 617
Patroclus is a pair of bodies nearly identical in diameter (105 and
95 kilometers). Merline was using the 8.1-meter Gemini
North telescope equipped with an adaptive-optics system.

Trojans follow Jupiter around the Sun in a 1:1 orbital
resonance. Many have settled near the gravitationally stable Lagrangian
points 60° ahead of and behind the planet along its orbit. Patroclus's
orbit is inclined 22° to the plane of the solar system, but
it matches Jupiter's period. These bodies, likely leftovers from Jupiter's
formation, are thought to be as numerous as main-belt asteroids. Thus
finding a binary Trojan is not surprising.

What comes as a shock is the nearly identical size of
Patroclus's partners. Asteroidal collisions happen at high velocities
and leave behind small rubbly remains. Thus Patroclus has probably been
a binary since primordial times. "It's unlikely an asteroid that big
would have experienced a collision in the past billion years," says
Stuart J. Weidenschilling (Planetary Science Institute). "It was most
likely [formed from] a glancing blow during accretion."