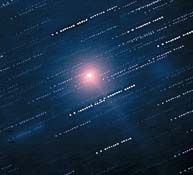 The two amateur astronomers who discovered Comet Utsunomiya-Jones (C/2000 W1) will each receive a cash award. Ian Griffin combined multiple images to make this image of the comet on November 30, 2000.

It doesn't quite match winning the jackpot of a Powerball
lottery, but two amateur astronomers will get several thousand dollars
richer, thanks to a generous bequest made by a late American businessman.
Albert Jones of New Zealand and Syogo Utsunomiya of Japan will share
the third annual Edgar
Wilson Award for amateur comet discovery. According to the Smithsonian
Astrophysical Observatory, which administers the award through the
Central Bureau for Astronomical Telegrams (CBAT), Jones and Utsunomiya
won the award for their discovery of C/2000 W1. The amount of this
year's cash prize is still to be determined by the award's trustee.
(In 1999, it was worth about $20,000.) Not since Edward Emerson Barnard
in the 1880s have amateurs stood to gain such sizable financial bounty
for their discoveries.

Utsunomiya first sighted C/2000 W1 on November 18th
last year while comet hunting with his 25x150 binoculars. Other observers
were unsuccessful in confirming the fast-moving, 8th-magnitude interloper
until Jones unknowingly picked it up a week later. Jones chanced upon
the object while star-hopping to the variable star T Apodis with his
3-inch finderscope.

This is Jones's second comet find; his first one, in
August 1946, was also discovered accidentally while he was locating
a variable star. At 80, Jones holds the record of being the oldest
comet discoverer.

"It feels very nice to win the Wilson award," he told
Sky & Telescope. "Dan Green of CBAT was the one who informed
me that I had qualified for the award. I've been retired since 1985
and I receive a small pension from the government, so the cash prize
would come in handy. I plan to make improvements to my 12½-inch
telescope and perhaps replace my ancient computer with a more modern
one!"

Established in 1998 in memory of Edgar Wilson of Lexington,
Kentucky, the prize is bestowed only to amateur astronomers who, in
a given year, find one or more new comets using amateur, privately
owned equipment. Discoveries can be visual, photographic, or electronic
(with CCDs). In years when no such discoveries are made, the SAO will
present the award to amateurs who have made major contributions to
promoting cometary studies. Seven individuals and two teams have won
the first two awards — six in 1999 and three in 2000. Long interested
in astronomy himself, Wilson died in 1976.