Dozens of telescopes await nightfall in this corner of the observing field at the 2003 Table Mountain Star Party.

With the summer star-party season in high gear, Sky & Telescope editors are fanning out to take in as many gatherings as possible. The end of July dark of the Moon was chosen for two premier annual events — one in Washington State and another in British Columbia, Canada.

The Table Mountain Star Party is held annually near the small town of Ellensburg in central Washington. This year saw about 1,000 amateur astronomers enjoying clear, dark skies and mild temperatures on the July 25th weekend. In addition to cooperative weather, attendees were also treated to an observing field crowded with hundreds of telescopes of all shapes and sizes, plus vendor displays and a packed schedule of informative talks. 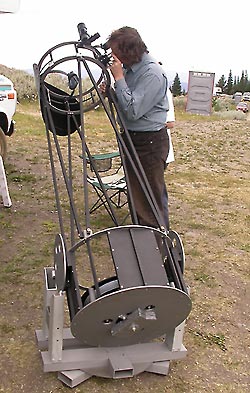 René van den Elzen demonstrates the 16½-inch Newtonian that he and his wife Nicole designed and built. This was one of several outstanding homemade telescopes on display at the 2003 Mt. Kobau Star Party.

Highlights were many, though of a largely personal nature. While sightings of the International Space Station and views of Mars nearing opposition will be long remembered by many, most observers seemed content to fill their nights with deep-sky viewing. The excited buzz of the crowd grew slightly louder when an aurora appeared on the northern horizon on Saturday night, though it has to be said that many were too busy enjoying the Milky Way's treasures to even notice!

Across the border, the Mt. Kobau Star Party celebrated its 20th anniversary with events culminating on the weekend of August 1st. MKSP is one of Canada's largest gatherings,
but attendance was down somewhat this year because of the perception that numerous forest fires in the region would produce skies dimmed by smoky haze. Although the southernmost region of the sky was compromised by smoke from a large fire in Washington, viewing conditions were for the most part excellent. 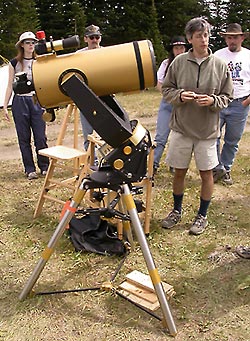 Of particular note this year was the unusually high number of exceptional entries in the telescope-making competition. Among the most noteworthy award winners were Marc Baril's 7½-inch f/8 Maksutov, which featured home-built optics and extraordinary mechanics that earned it the mechanical excellence award, and René and Nicole van den Elzen's ultralight 16½-inch altazimuth Newtonian — a masterpiece of machining and design that won the award for best first-time telescope.

Next year's Table Mountain Star Party is scheduled for July 15–17, while the Mt.
Kobau event will run August 14–22.