When I arrived at Caltech in 1969 as an eager freshman, I remember admiring a series of color photographs — yes, actually in color — taken by the famous 200-inch Hale telescope on Mount Palomar. They were amazing for their day. I remember thinking that some anonymous astronomer had no doubt begrudgingly agreed to squander precious observing hours photographing a few celestial baubles for public-relations purposes.

How times have changed! Today a friendly competition exists among major observatories — most notably the Hubble Space Telescope and the powerhouse European Southern Observatory — to outdo each other's dramatic cosmic vistas. 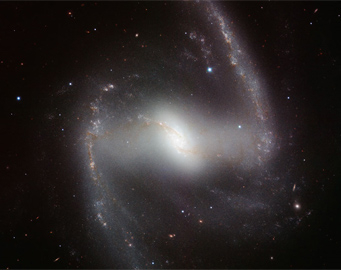 Exhibit A is an ESO image made public yesterday of NGC 1365, sometimes called the Great Barred Spiral Galaxy, about 60 million light-years away in the southern constellation Fornax. Just over a week ago, the Europeans released a view of this elegant pinwheel taken in visible light, and now they've followed up with a composite made through four different near-infrared filters.

Each view has its strengths. Visible wavelengths accentuate the dust lanes that drape along the long arms and seemingly extend all the way to the core. Crimson-colored patches of hydrogen-alpha emission pinpoint where bursts of star formation are ongoing. The infrared view cuts through much of the dust and gives a better feel for the bloated concentration of old stars that dominated the pronounced central bar.

You can compare the two looks in a side-by-side view here or, better yet, check out this nice video montage (complete with music soundtrack!) that flips back and froth between the two.

Interestingly, since the 1990s astronomers have suspected that the bar might be a recent addition. In any case, it transitions to a pair of sweeping arms, bedecked with star-forming regions, that overall span some 200,000 light-years. 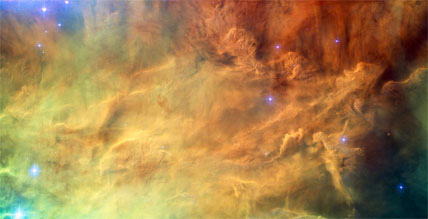 The Hubble Space Telescope has revealed the heart of the Lagoon Nebula, a massive cloud of glowing dust and gas, bombarded by the energetic radiation of new stars. For a larger view, click here.

Exhibit B, also released today, is a spectacular close-up of the Lagoon Nebula (cataloged both as Messier 8 and as NGC 6523) taken by the Hubble telescope's Advanced Camera for Surveys. The waves of fluorescing interstellar gas take on a strangely three-dimensional aspect in this 3-arcminute-wide view, the kind of turbulence that I wouldn't have imagined inside a lagoon (cosmic or otherwise).

The Lagoon is bright, large (1½° across), and a mere 4,000 to 5,000 light-years distant — easy pickin's for backyard telescopes of any aperture on these late-September evenings. It's too bad that our eyes can't detect this riot of color when we view this showpiece; through cruel evolutionary fate, our night vision renders such spectacles only in shades of gray. But we wouldn't see this in any case: even the mighty Hubble needed a hour's total exposure to get the three frames used in this composite.

There's no new science here — just some touristy snapshots to impress the friends and relatives back home. But if you want to know a little more, read up on NGC 1365 here and on the Lagoon Nebula here.

... of the Lagoon Nebula? from Hubble. I see no picture, nor any link.

Beautiful photos, and the video montage is lovely too. If I catch a look at the lagoon nebula this evening I'll remember that awesome Hubble picture. Scientific understanding and aesthetic beauty can be complementary, and long-exposure astrophotographs add an imaginative "third dimension" to what I can see through my little telescope in the back yard.

Thank you Kelly for sharing both the science and the beauty of astronomy.

These are indeed beautiful photos. They will make great additions to anyone's computer wallpaper collection. I can see what the ESO article says are star clusters in NGC 1365, but do I also detect a much more distant cluster of galaxies, seen through and around parts of 1365? If so, what is it? I find no mention of it in this article nor in the ESO article linked to.

Beautiful 🙂
There's nothing wrong with 'touristy snapshots', of the sky or otherwise, when they provide you with beautiful views of places you would never see otherwise.
Thanks for posting.

If you can't enjoy something, why bother?