Just last month I wrote about how Ulysses, a European spacecraft launched in 1990, was completing its third and likely final pass over the Sun's polar regions. At the time it looked as if European Space Agency engineers would be able to sustain the craft for a couple more years. But bad luck has struck, and now it appears the mission is in its final days. 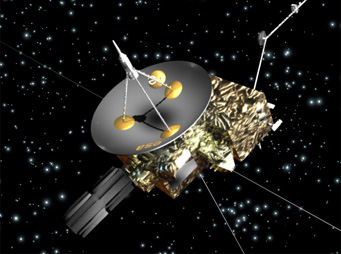 Launched in 1990, Ulysses has sailed over both of the Sun's polar regions every 6.2 years as it circles in a looping orbit that extends out to Jupiter and is almost perpendicular to the ecliptic.

A joint mission between ESA and NASA, Ulysses was originally designed for a lifetime of five years. It's powered by plutonium-fueled generators, and their electrical output has been declining slowly. Recently the waning watts reached the point that not everything aboard could be operated at once.

So, last month, the ESA team tried turning off a key part of its communications system called a traveling-wave tube. Unfortunately, the TWT wouldn't switch back on, effectively dooming further operations. Worse, the dwindling power means that onboard heaters won't be able to keep the craft's temperature above 35°F (2°C), at which point the hydrazine fuel onboard will freeze.

Ground controllers are still in contact with Ulysses, but only a trickle of its data is reaching Earth. In an ESA press release about the situation, project scientist Richard Marsden states that his team will keep the craft going for as long as they can.