Under Stress, Asteroids May Be Fragile 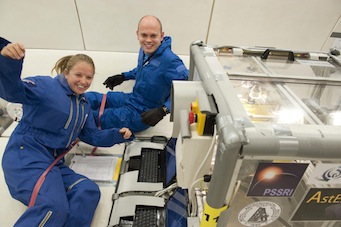 Naomi Murdoch and Ben Rozitis float in microgravity aboard an Airbus jet with their experiment, dubbed AstEx (Asteroid Experiment).

Asteroids may look like solid hunks of rock, but the smallest are collections of debris barely bound by gravitational fields a million times weaker than Earth's. Now, a flying lab experiment indicates that these loose surfaces may be even more unstable than previously thought.

The study, conducted by a European team, investigates the behavior in microgravity of "force chains" propagating through particles. A dramatic example of a force chain is a house of cards, which is held in place by the network of forces between cards. Break one link, and the whole thing comes tumbling down.

To explore how force chains behave in loose asteroid soil (called regolith), the team built an apparatus with two cylinders, one inside the other, and filled the gap in between with "grains" — balls 3 to 4 mm across. The inner cylinder rotated, dragging the innermost balls with it and compressing them against each other as they sheared against the outer balls.

But the team was really interested in what happens when the inner cylinder reverses direction. In 1 g, at the moment of reversal, force chains ripple through the compressed material, jerking distant grains in the new direction of rotation. To find out what happens in microgravity — like on an asteroid — the team put the apparatus on an Airbus jet flying parabolic trajectories. 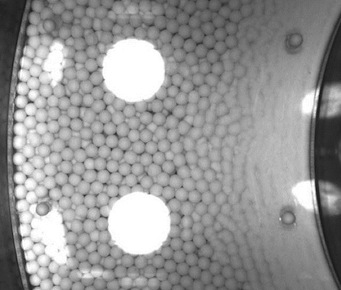 In the experiment, balls 3 to 4 mm in diameter stood in for asteroid grains. Here they're seen in the gap between the two cylinders of the apparatus.

"Initially, we weren’t entirely sure what was going to happen as no one had done this experiment before," said study coauthor Ben Rozitis (Open University, UK). One thought was that force chains might be weaker in microgravity, so the balls would lurch less dramatically. But this proved true only close to the rotating cylinder: the distant balls near the outer cylinder, which were unaffected in 1 g, moved dramatically in the jet experiment, indicating that force chains propagate much further in microgravity under this "shear reversal."

This long-distance effect suggests that asteroid soil has a "memory." If the surface has been pushed or pulled in one direction, an impact that goes against the grain — just as the cylinder’s spin reversal goes against the previous rotation — could be more destabilizing to the asteroid than previously thought. "A lander touching down on the surface on one side of a small, rubble-pile asteroid could perhaps cause an avalanche on the other side," stated study coauthor Naomi Murdoch (Institut Supérieur de l’Aéronautique et de l’Espace, France). 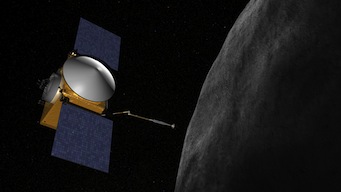 This result is one demonstration of a new understanding of asteroid surfaces, says Dante Lauretta (University of Arizona). "We are looking at the regolith more like a fluid than as a gravel pile, which is what we originally started to treat it as," he says. "You assume nature behaves a certain way and when you get in these microgravity environments, things really behave differently"

Lauretta is a particularly interested party, for he heads the development of OSIRIS-REx, a spacecraft that will rendezvous in 2018 with asteroid 101955 (formerly 1999 RQ36), an Earth-threatening rubble-pile asteroid also known (by popular vote) as Bennu. A half kilometer across, Bennu has surface gravity about 10 micro-gs, or a measly 10 millionths of Earth's.

OSIRIS-REx is designed to return up to 2 kilograms of samples in chunks about a centimeter across — more extraterrestrial rock than any mission since the Apollo moon landings. (For comparison, the Japanese probe Hayabusa, which rendezvoused with the asteroid Itokawa in 2005, brought back less than a milligram of mostly microscopic grains.) To obtain them, the team has designed a sampling device on the end of a pole that blows compressed nitrogen onto the surface to break off chunks and send them flying back into a container. Knowing how the regolith will behave when it touches the surface is crucial.

"We need to know what to expect when we make that contact," says Lauretta. "Are we going to slip, like a banana-peel-kind of effect? Are we going to grab ahold? Is something going to grab ahold of us and make it harder for us to get away from there? It needs to be loosely bound. It can't be kind of crusted or cemented or anything like that. … So we're going to take all of the work that's been done like this to make assessments of the asteroid's surface and ultimately select the site to get the sample." 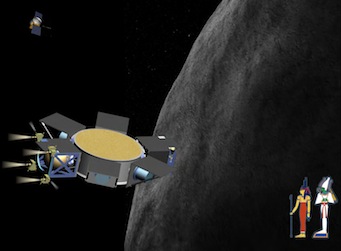 In this illustration, ISIS is about to smack into asteroid Bennu, as OSIRIS-REx watches on from afar (upper-left). The lower right icons are the Egyptian gods (and craft namesakes) Osiris and Isis.

NASA is currently reviewing a proposal for a second mission to Bennu: ISIS (Impactor for Surface and Interior Science). This craft would piggyback to space in 2016 aboard the Mars InSight probe, make its own way to Bennu, and slam into it while OSIRIS-REx hovers nearby to snap pictures and measure how much the crash deflects Bennu's trajectory. If selected, ISIS would both tell scientists about the asteroid's internal composition and serve as a test for a potential asteroid-defense technique.

But force chains wouldn't matter much in that case. "High-energy impact experiments like ISIS would really be looking at an entirely different regime and, therefore, a different type of behavior," said Naomi Murdoch. "It is likely to be the seismic waves that are produced during the impact that will dominate the behavior on a global scale."

Could it destroy the asteroid? "No, no, we're two orders of magnitude below the level of energy that's required to remove, say, half of the volume," said Steven Chesley (JPL-Caltech), the leader of the ISIS team. "We're definitely not in the regime where catastrophic destruction of the body could take place."

Amateur observers can get involved with OSIRIS-REx by participating in its "Target Asteroids!" project.

NASA spacecraft NEAR Shoemaker entered orbit around Eros in 2000, and came to rest on its surface in 2001, and still was functional enough to analyze the surface material. So at least it didn't get buried in any landslides.