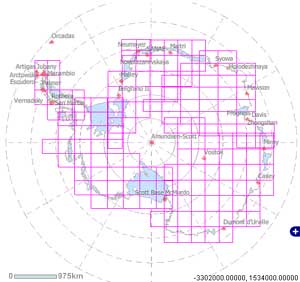 Darn! The coverage for the newly released photomosaic of Antarctica apparently doesn't include the South Pole.

I guess everyone else heard about NASA's release yesterday of a new photographic map of Antarctica and decided to take a look this morning. Accessing the Landsat Image Mosaic of Antarctica (LIMA) website was as slow as a glacier. Various parts of the site weren't working very well — like pop-up windows with no apparent way to close them. And then I got a server-unavailable message. Thanks for overloading the server everybody! It came back up after a while, but the map browser still isn't working for me yet.

Anyway, I can't wait to look it over. I presume eventually the new images will be incorporated into Google Maps and Google Earth. According to the map of image coverage, however (see accompanying picture), it doesn't appear that we'll be able to zoom into the South Pole itself — just where most people would want to look!

Until the server's back online, you can read more about the project — part of the International Polar Year — at this NASA article.